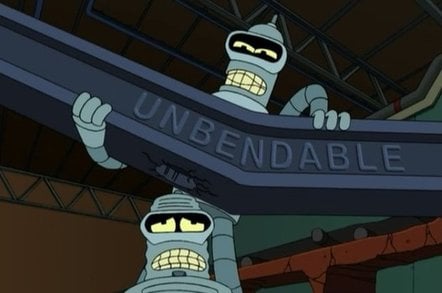 Vid The bending epidemic that beset Apple's latest iPhone models is not isolated to Cupertinian kit, according to testers.

A video posted on YouTube suggests that the Samsung Galaxy S6 could be even more prone to bending and breaking than the iPhone 6 Plus. A stress test found that not only would Sammy's phone bend, it could even shatter under the same conditions that bent Apple's handset.

"Instead of a bent phone," said researchers from SquareTrade, "they may have a pocket full of glass."

Researchers also noted that the HTC One M9 has a higher bending point than the iPhone, but became unusable at a lower pressure, because its power button is located at the same point where the handset bends.

Apple took heat for the pliability of its newest iPhone model last year, even though it argued that such damage was "extremely rare." Watchdog group Consumer Reports also found that the iPhone 6 Plus was hardly the flimsiest of a group of phones it submitted to bend tests and was tougher than some. Still, iPhone 6 Plus owners reported that the handset couldn't be carried the way previous iPhones had without risking breakage.

The results of SquareTrade's latest test again challenge the notion that Apple is alone in producing a large-screen handset that puts form over function.

Should other hardware vendors prove vulnerable under the same conditions, we'll all be forced to ask whether making a device ultra-wide and super-thin at the same time might actually have some consequences, particularly those who are fond of walking around with their phones in their back pockets. ®