Senator is 'deeply concerned' over disclosure of candid pics 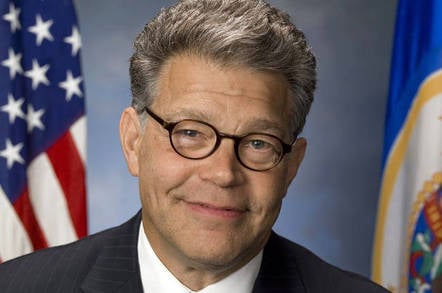 Franken (D-MN), a member of the Senate Judiciary Committee, said in an open letter (PDF) to FBI director James Comey that he wants authorities to do more to track down and prosecute those who share imtimate photos without the subject's conset.

"I am deeply concerned by reports of individuals, mostly women, having explicit images of themselves posted on websites when they did not consent to their disclosure," Franken said.

"These images are often accompanied by personal information, including names, addresses phone numbers and employers."

"It is critical that when victims report these images to federal law enforcement they receive expeditious assistance and are treated with sensitivity," wrote Franken.

"Victims' suffering should not be prolonged as pending investigations result in their images remaining online, with the risk of continued harassment."

Podcast And while we’re at it, why do music labels still even exist?

Spotify mulls Swift change of policy – we can stream Taylor, but we'll charge