Businessman given sentence over five pics in closed-door hearing 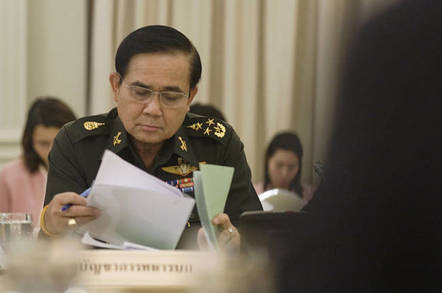 Setting a record for what may be the most unreasonable jail sentence ever handed down over a Facebook post, a Thailand citizen has started a 25-year stretch behind bars for five pictures deemed insulting to the country's monarchy.

Tiensutham Suttijitseranee, a 58-year-old businessman, was convicted in a closed military court earlier today, according to Reuters. His relatives and reporters were not allowed to attend, but his lawyer said he was given 10 years for each picture, and the 50-year sentence was then halved because he pleaded guilty.

Tiensutham posted five pictures to Facebook, and added captions that the court decided were defamatory to the Thai royal family. Thailand has the world's toughest lèse-majesté laws, and it is a crime to insult or threaten to king, queen or regent.

Since a military coup in May 2014, the country's prime minister – previously the Commander in Chief of the Royal Thai Army – has taken an aggressive stance against anything he feels insults the monarchy.

"Whoever defames, insults or threatens the King, Queen, the Heir-apparent or the Regent, shall be punished with imprisonment of three to fifteen years," reads the law, although it has also been interpreted to mean almost anything connected to the royal family.

What do you have to do?

Putting a photo of anybody above a photo of the king – even on a website – is taken to be a crime, as is failing to stand when the royal anthem is played at cinemas. Recently, Thai salesman Ophas Chansuksei, was given 18 months in jail for writing graffiti on a toilet wall that was deemed inflammatory.

There were about five lèse-majesté cases each year until 2005 when the king's public invitation of criticism caused a jump to around 80 cases each year. Yes, the king asked for people to come forward with their concerns, and prosecutions followed.

A military coup took place the following year, with a lèse-majesté case brought against the prime minster at the time cited as one of the reasons for takeover – the army chiefs weren't happy with the premier apparently insulting the king.

The Thai government also applies the law online, blocking tens of thousands of websites for alleged insults against the king, even blocking YouTube after it discovered a single video that it felt was insulting.

When comedian John Oliver ran a segment on his US news show Last Week Tonight mocking the country's laws, and showing part of a home video of the crown prince and his topless wife at a poolside birthday party for their pet poodle Foo Foo, calling the prince a buffoon and an idiot, he ended up being named in an official government document as a threat to the nation.

Talking of the lèse-majesté law, Oliver quipped: "You're telling me they're not supposed to make fun of that? That's entrapment!"

That video is no longer available online, but Oliver's response to the government document is.

Although today's prime minister is an ardent royalist, many suspect the real reason for the excessive sentences and crackdown is that the king, 87-year-old Bhumibol Adulyadej, is in failing health and the military is worried about what may happen when he dies. ®