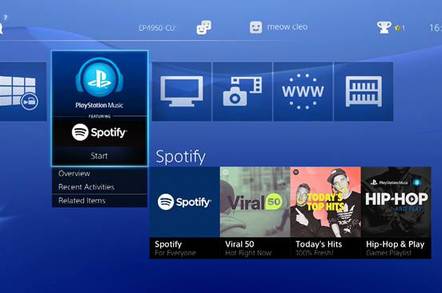 On Sunday, as promised, Sony killed off its Music Unlimited song streaming service and now the replacement is in place: Spotify is slinging music to PlayStation users from the cloud.

"I remember playing computer games like Quake and Counter-Strike with my favourite tunes on in the background – taking the experience to a whole new level."

PlayStation 3 and 4 users will shortly be able to access the Spotify soundtrack list from their consoles and pick tracks to play along to – be it blasting through Los Santos to Beethoven's symphony no. 3 Eroica or moshing to Anthrax during a spell on Assassins Creed.

The software can also be controlled remotely using a smartphone app linked to Spotify, allowing the user to pause, skip forward on track lists, or even pick a new song without interrupting gameplay.

Sony said the support for the Spotify was rolling out over 41 territories from Monday, and the application will also be embedded in later versions of Sony's Xperia smartphones and tablets. ®