Galaxy S6 and S6 Edge in Vulture's claws: we find looks AND brains 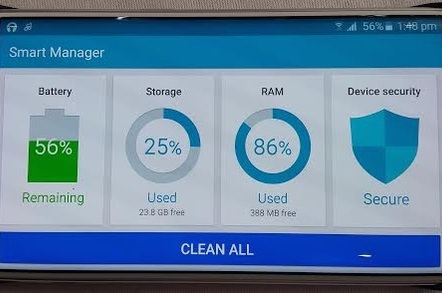 FIRST LOOK Samsung's gone for beauty and brains with its new Galaxy S6 and S6 Edge, but hasn't fallen into the trap of style over substance.

Last year's S5 packed all sorts of features into a tired-looking package and while the phone was a technological marvel, it wasn't easy on the eye and didn't set the pulse racing.

Both S6 models take care of both problems. The S6 has an attractive matte finish, some nicely chiseled planes on its sides and a high-gloss screen that took half an hour of thumbing to dirty. The black model, in particular, feels like something new as at certain angles it appears there's no space between the last row of the screen's pixels and the bezel. That missing strip of black surround makes the handset feel better-engineered. It's an impressive package.

My initial reaction to the S6 Edge was to heft it in a few ways, because the curved screen meant I needed to learn how to hold it securely. Between the glass back and the curved sides my grip on the handset felt a little precarious. A few minutes in and I could start to enthuse about the Edge. The curved edges themselves are gimmicks: the clock and basic indicators will appear there if you rub it back and forth, magic lantern style, and there's there's an interface that allows access to one's five favourite contacts. Neither feature is a market-maker. But the Edge might just be because it's a nice advance on the standard slab shape that's come to dominate the smartphone market.

In Australia, you'll pay AU$1149 for the Edge, vs. AU$999 for the vanilla S6. That's a big premium for a mostly aesthetic feature.

Samsung's made some worthy changes to the phones' user interface. My reaction upon using the S4 and S5 was to head straight to an app store in order to install Nova Launcher so as to avoid mixed user interface metaphors. I'll happily skip that step if an S6 becomes my main phone because the UI now omits the odd mix of half-screen tiles and gridded click-to-launch icons. A new “Smart Manager” (depicted above) typifies the new approach of making it easier to find system information, settings and apps.

Icons have been given a nice refresh and one can now install themes which replace typefaces and icons with a new look and feel. The handful installed on the handsets I sampled at a press lunch today tended towards the cartoony, but made the default Samsung set look a little jaded.

Sound was good on the S6 and the Edge. The phones' tiny speakers don't lend themselves to great audio, but you wont miss a pop song's melody even if you wonder just what kind of percussion is being played. The screens are buffed to a high sheen and performed impressively: I'd watch a movie on the train to work without complaints about the video.

Both handsets were nicely responsive, although it's hard to say if the new eight-core Samsung chippery is the reason or if my current year-old handsets are suffering from accumulated cruft. The innards did, however, warm up in a hurry. And half an hour of poking an S6 Edge knocked ten per cent off the battery capacity. That might be a problem because the S6 no longer offers a removable battery, nor a micro SD card slot. Samsung reckons fast charging mode takes care of the first issue by delivering a promised four hours of use after ten minutes of jolting. 100GB of bundled, free-for-two-years OneDrive cloud storage is said to be the remedy for the missing expansion slot. Samsung makes that assertion after first assuming you've got an LTE and/or connection with plenty of download allowance to spare.

Overall, the S6 feels like a solid upgrade that emphasises usability, not obscure fitness functions or silly eye-tracking. The S6 Edge offers a slightly different experience, for the first half an hour at least, and a softer look that will appeal to many. It'll be interesting to see how it wears over time.

Will they be hits? My gut suggests the S6 and Edge will be better-received than the S5. The handsets are more stylish than their predecessor and offer improved Android integration. If Samsung's nailed power consumption, too, there's no reason the phones won't become very popular indeed. ®