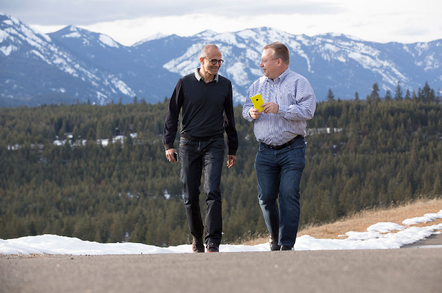 Microsoft has tentatively opened up its Windows 10 Technical Preview to more phones, after its initial list back in February had been extremely limited.

The software giant's Gabe Aul said in a blog post on Friday that its builds-for-mobes list was merely preliminary.

"[A]s Windows Insiders I wanted to give you the visibility even though it's not 100 per cent locked," he said.

Unsurprisingly, a saunaload of Lumia models have now been lobbed on the pile.

A larger set of phones are now on the list, because – Aul explained – Microsoft has almost solved its so-called "partition stitching" function, which would apparently allow Redmond "to re-size the system partition dynamically" and thereby open up the build to more mobes.

Aul, however, was steadfast about keeping planned shipping dates for new builds secret. He said:

[W]e feel great here about the partition stitching code and current builds, but we likely still have at least one more week of engineering to do to ensure we get a great build for the expanded list of devices.

Aul also warned that if a bug is spotted in a specific device, then it will subsequently be plucked out of the list, which looms large below:

Redmond's testing of the partition stitching code would allow the firm to "support A LOT more phones for the next flight," Aul promised. ®