Surface Pro 3 update has so much new stuff for sysadmins, we can't fit it all in one headline

Isn't it time for the pub? 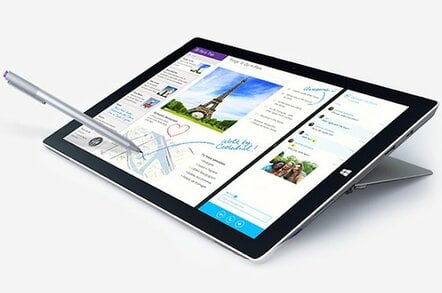 Microsoft has released a significant new firmware update for Surface Pro 3 fondleslabs, the second to arrive this month.

As explained in a blog post by Redmond's JC Hornbeck, the latest update to the Surface Pro 3's Unified Extensible Firmware Interface (UEFI) adds new features for enterprise customers but only minor improvements for consumers.

With the update installed, IT admins can now configure Surface Pro 3 slabs to boot from alternative media – such as USB drives or PXE – automatically. Previously, the user had to hold down the Volume Down button for it to work.

Admins can also now selectively disable features of the devices for added security, including the USB port, docking ports, the cameras, the microSD slot, onboard audio, Wi-Fi, Bluetooth, and PXE booting.

What's more, the new firmware – version 3.11.760.0 – adds an interface that will allow admins to configure UEFI settings remotely, although the tool to actually do this won't arrive until a future update.

Along with these new enterprise features, Microsoft has made changes to improve the performance of software that loads before Windows – such as third-party disk encryption tools – and it has also fixed an occasional issue with how drivers load.

This latest firmware update comes hot on the heels of the last one, which shipped on March 10. That release, version 3.0.64.0, didn't fix any bugs but "enables new functionality and features for the Surface app found in the Windows Store."

Unfortunately, we don't know what those features are; so far, nothing seems to have changed. It may be that we won't know what's been tweaked until a future release of the Surface app.

Surface Pro 3 is the only member of the Surface Pro family to receive a firmware update in March so far. The original Surface Pro last received a security update in January, and Surface Pro 2 hasn't received any new firmware since October. The ARM-powered Surface RT, on the other hand, received updated audio and display drivers on March 10.

Like all firmware updates for Surface, the latest Surface Pro 3 firmware is being rolled out via Windows Update. If you prefer, though, you can also download the 154.4MB standalone installer here. ®