Satnav launches are like buses: none for ages then three arrive at once 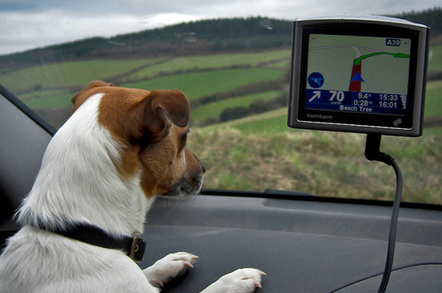 Satellite navigation satellites turn out to be a lot like buses: there's none for ages, then three come along all at once.

The first of the three launched on Wednesday to join the US Global Posititioning System constellation. The new bird is a Boeing-built GPS IIF, the ninth of its type and one of 12 in a fleet of satellites intended to last a dozen years apiece and keep the system working until the replacement fleet of 32 IIIA-class craft are in place.

This new satellite, which goes by the name SVN-71, took three hours and twenty minutes to reach orbit and soon afterwards sent back a signal to say it was alive and well. Further testing is under way to ensure the craft is ready for work.

The second and third satellites about to offer you a ride to wherever you choose are the seventh and eighth Galileo satellites. The European Space Agency (ESA) hopes they'll soar on a single Soyuz on Friday at 21:46:18 GMT.

That launch should appear in the embedded video below, come the anointed hour.

The two Galileos are expected to require 3 h 47 min 57 sec to reach their intended orbit, 22,522 kilometres above Earth. Each will head off to its own patch of space once they arrive.

The last Galileo launch went badly: both birds ended up in unintended orbits that took months to repair. The ESA is doubtless hoping things go better on Friday evening. ®