Agreement on protocol is the key 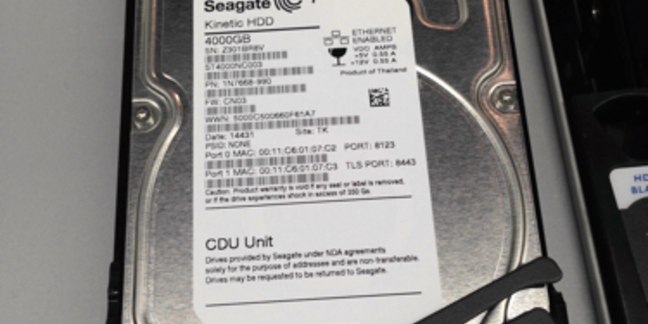 The Storage Networking Industry Association (SNIA) has a tech workgroup looking at object-based disk drives, such as Seagate’s Kinetic product, and is aiming to standardise access.

Seagate’s Kinetic disk drive has object-style Get and Put interfaces access over a direct Ethernet connection to the drive. HGST is developing its own Ethernet-accessed disk drive.

Such drives are said to be simpler and more efficient to access (from an application point of view) because the traditional host server-disk array controller IO stack can be by-passed by writing and reading directly to and from the disk.

A standard access protocol would provide a lock-in-free method of accessing the drives.

The OSD specification defines low-level storage device functions that enable accessing a storage device through a standard object interface rather than a traditional block-based interface such as SCSI or IDE.

The OSD specification is published through INCITS T10 as part of the SCSI standard.

This workgroup has been around for several years. Our understanding is that the SNIA people are looking to have the Kinetic drive’s protocol form a foundation for a standard so as to harmonise the Ethernet-accessed, object disk drive market and enable its growth.

There are three disk drive manufacturing groups: Seagate/Samsung with its Seagate Kinetic drive; WD/HGST with its HGST development; and Toshiba, which looks to be out in the cold with no object access disk drive technology that we know about.

If the SNIA can get Seagate and HGST to agree a single access protocol then the Ethernet object-access disk drive market could take off, giving storage array controller companies another headache. ®