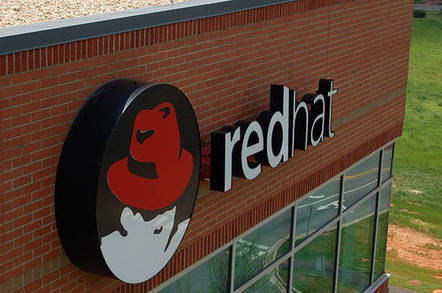 Red Hat's shares are on the up after the Linux distro maker beat Wall Street's expectations in its fourth financial quarter, ended February 28.

The North Carolina biz reported revenues up 16 per cent during the three-month period, compared to the same period the year before, and up 17 per cent for the whole year, even accounting for the strong dollar. Profit growth was flat, however.

Total revenue for the quarter was $464m, with $405m of that coming from subscriptions. For the full year, Red Hat cleared $1.79bn in sales, with healthy growth in its open and hybrid cloud business.

"Red Hat delivered strong fourth quarter results that were highlighted by subscription revenue and total revenue that both grew over 20 per cent year-over-year on a constant currency basis," said Jim Whitehurst, CEO of Red Hat.

"Customers value the consistency and flexibility as they run their applications using Red Hat solutions across a variety of deployment models, including public and private clouds, to modernize and transform their IT infrastructure. We believe that our strategic position as a trusted provider of infrastructure and our execution this past year have positioned us for strong constant currency revenue growth in the next fiscal year."

In the year-ago quarter, Red Hat recorded a GAAP net income of $45m, and $178m for the full previous year. Little change, but it was above analyst's expectations, and the firm's stock rise sharply in after-hours trading.

Part of that rise can also be attributed to plans for the biz to spend more cash buying up its own shares. As part of the earnings announcement, Red Hat said it will allocate $500m to share buybacks in the coming year.

"Over the past four fiscal years, we have repurchased over $1 billion or approximately 19.5 million shares of Red Hat common stock," said Charlie Peters, Executive Vice President and Chief Financial Officer of Red Hat.

"Given our strong conviction about our long-term growth prospects, a healthy balance sheet and the ability to generate operating cash flow, the Red Hat management team and Board of Directors believe that a new repurchase program will create further value for our shareholders." ®