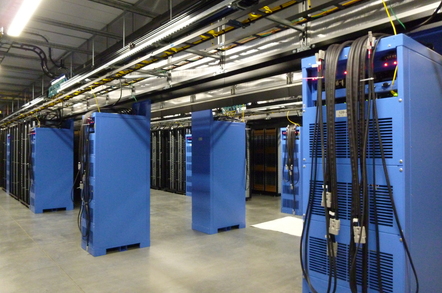 Facebook is being sued in the US by a UK biz, which claims Zuckerberg & Co stole its blueprints for data centers.

Specifically, BladeRoom claims Facebook took its ideas and handed them to the FB-led OpenCompute Project, an initiative that “gives the public 'full access to the specifications' used by Facebook in its data centers”, according to the court claim.

BladeRoom says that in January 2014 the OpenCompute Project (OCP) presented BladeRoom's IP as its own, having repackaged it as something called the “rapid deployment datacenter”. The British firm also says Facebook awarded a contract to build a pre-fabricated, modular data centre, based on its ideas, to Emerson Network Power in Sweden in May 2014.

At this stage, Emerson Network Power is not a party to the case, nor is there any suggestion that Emerson knowingly infringed upon BladeRoom's intellectual property in building Facebook's Luleå building 2 data centre.

BladeRoom – referred to as BRG in court documents [PDF] – filed its lawsuit with the federal court in San Jose in the Northern District of California. The complaint – filed March 23 – is heavily redacted.

"In January 2014... Facebook announced to the world it had developed a revolutionary new method of constructing large, mission critical data centers," the claim states. It continues:

Facebook claimed that it developed an innovative, pre-fabricated and modular construction approach and, extolling its benefits, encouraged the entire datacenter industry to shift from traditional practices to this new method. What Facebook did not disclose, however, was that this methodology and the detailed know-how supporting its use had in fact been stolen by Facebook from BRG.

According to the filing, Facebook decided at that January meeting “to encourage and induce others to use BRG's intellectual property as well by revealing BRG's confidential information." The suit further claims Facebook continued to encourage others to use its new "rapid deployment data center" in a March 2014 blog post.

BladeRoom says it contacted Facebook in October 2011 over its pre-fabricated modular design and transport and construction techniques.

Also involved in the case is a second British company called Bripco, which licenses its technology and designs to BladeRoom.

BladeRoom is seeking damages and legal fees covered. It wants redress for the alleged breach of good faith, misappropriation of trade secrets, unjust enrichment at its expense, unfair business practices and unfair competition.

Founded in 2008, BladeRoom builds modular, power-efficient data centers, claiming a PUE (power usage effectiveness) of 1.13, on a scale where 1.0 is the theoretically best performance. Data center PUEs are usually 1.5 or more.

The firm has worked on large-scale food-production systems, urban and remote locations, and worked on facilities for the last three Olympic Games.

This is the second time Facebook has been accused of treading on other people’s data centre patents. Yahoo! claimed in 2012 that Facebook had infringed up to 16 patents covering advertising, privacy, site customisation, social networking and integrated communications in social networking. Facebook struck back, counter-suing over ten of its own patents. The companies settled in the same year, entering what they called a “strategic” deal that did not involve cash payments. ®

Updated Just when you thought things couldn't get more intrusive