Spookception: US spied on Israel spying on US-Iran nuke talks

'I think the report is wrong, it is inaccurate' says everyone named in report 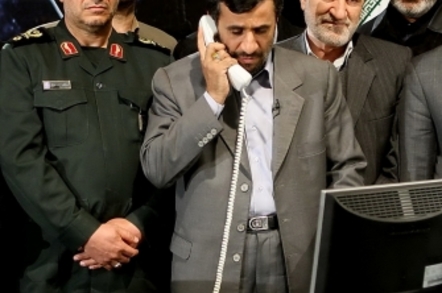 Israel spied on the recent US-Iran nuclear talks, alleges America. And the US knows enough about it to say it publicly because the NSA is spying on Israel, along with everyone else.

The Wall Street Journal reports that Israel handed over confidential information from the negotiations to friendly members of the US Congress in a bid to derail any deal.

Israel denies the accusations, which highlight a widening gulf between Binyamin Netanyahu’s hawkish government in Israel and the Obama administration.

The talks began in 2012 as part of an attempt to resolve a decade-old dispute over Iran’s nuclear aspirations. Israel has consistently warned that Iran is developing expertise in nuclear materials primarily to develop a bomb. For a long time the US shared these concerns, which led to the development of the infamous Stuxnet nuke centrifuge buster malware and related programmes around 2010.

The world turns and strategic priorities have moved on. These days Iran is an ally in the fight against Middle Eastern terrorist group the Islamic State so the US wants to talk. Israel, unsurprisingly, wants to snoop on these talks.

The apparent decision by the White House to leak the allegations of Israeli spying comes a week before a deadline to produce a framework agreement from the ongoing negotiations in Switzerland. American diplomats have reportedly been briefed by US counter-intelligence about precautions that they would need to make in order to frustrate Israeli snooping.

Although the US has an intel sharing arrangement with Israel that makes it one of its closest allies outside the Anglophone Five Eyes alliance, the country is also regarded as among the biggest threats outside of Russia, China and France.

The US learned of the Israeli spying operation after it spotted Israeli officials exchanging classified info related to the Iran-US negotiations. Spying is all part of the grand game but what seems to have particularly narked the American is the use of stolen intelligence to brief Congress in a bid to sabotage the ongoing talks.

“It is one thing for the US and Israel to spy on each other. It is another thing for Israel to steal US secrets and play them back to US legislators to undermine US diplomacy,” a senior US official told the WSJ.

Israel denied spying on the nuclear negotiations directly, implying it had obtained a low-down on what was going on during the talks via an unnamed third-party source.

“I think the report is wrong, it is inaccurate,” outgoing Israeli foreign minister Avigdor Lieberman told Israeli Army Radio, The Guardian reports. "All the information we gathered was from another entity, not the US. We reached a decision a long time ago not to spy on the US and I haven’t come across anyone who has violated that instruction in several decades.”

The Speaker of the House of Representatives, John Boehner, a Republican from Ohio, denied receiving any information from Israel, expressing bafflement about the WSJ's report. Other US legislators on both sides of the political divide said that they were briefed on negotiations only by the Obama administration.

Accusations of Israeli spying on the US are not in themselves new.

The IDF tapped the US Secretary of State's unencrypted calls while trying to broker a ceasefire between Israel and the Palestinian Authority during a period of conflict in Gaza. ®