YOUR DATA could be SOLD in RadioShack's bankruptcy auction 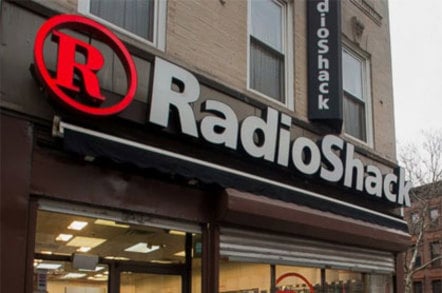 Customer data is being considered as an asset for sale as part of RadioShack's Chapter 11 bankruptcy auction.

The auctions, which took place earlier this week, are set to receive either approval or rejection from a federal bankruptcy court on Thursday.

Among the assets available are 250+ stores in Mexico, just under 1,000 franchise and dealer relationships, a range of intellectual property including patents and trademarks, and a truly enormous collection of customer data.

Hilco Streambank, an advisory firm specialising in the “valuation, marketing, and sale of intagible assets” and serving as an intermediary for RadioShack, list over 65m files containing customer names and physical addresses, and 13m customer emails, among the available assets.

It is unknown whether the bankruptcy court would approve the sale of this information. Bloomberg reports that two legal challenges have been filed regarding the sale of customer data, and that the court "has appointed a 'privacy ombudsman' to handle issues related to sensitive data," although the ombudsman is yet to rule on either challenge."

Standard General LP has increased its initial $145m bid and aims to purchase over 1,700 of the electronics retailer's stores, and hopefully save 9,000 jobs. The deal is reportedly part of a collaboration touted "with mobile network Sprint to create a separate company called General Wireless."

RadioShack filed for bankruptcy on February 5, following years of financial woes which saw its share price tumble from $24.33 in 2000 to below $1 in 2014.

It's technically an acquisition, but the headline fit so perfectly we couldn't resist