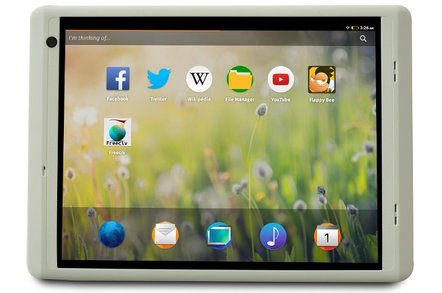 No longer content to cede the mobile processor market to ARM, British chip firm Imagination Technologies has unveiled a new reference tablet design powered by a CPU based on its MIPS architecture.

Although designed to cost less than $100, the 9.7-inch device is more demo than actual product. Built by Chinese ODM Ingenic, its specs are basic, including Micro USB and Mini HDMI ports, 802.11n Wi-Fi, Bluetooth 4.0, front and rear cameras, and a display with 1,024-by-768 resolution.

What sets this unit apart from other bargain basement Chinese slabs, though, is that its processor is not an ARM derivative, but Ingenic's homebuilt JZ4780, a 32-bit MIPS design.

MIPS, a RISC-based architecture, competed against the likes of DEC Alpha and Sun Sparc during the heyday of RISC-based Unix systems in the 1990s and early 2000s. But Imagination, which acquired MIPS in 2013, has mostly peddled the processors for use in the likes of routers, LTE access points, and embedded systems.

Although Android has been running on MIPS since as far back as 2009, the architecture never caught on with smartphone vendors, who have all but standardized on ARM. That's something that Imagination would like to change, with the help of Ingenic and other members of its "prpl" development foundation.

The Reg got its first close look at the JZ4780 earlier this month, when we put Imagination's CI20 development board through its paces. The short description is that it combines two 1.2GHz MIPS processor cores with Imagination's PowerVR SGX540 GPU.

Although the JZ4780 is fully capable of running Android 4.4 KitKat, however, another quirk of the reference tablet is that it also supports an experimental version of Mozilla's Firefox OS, an operating system based on web technologies that has lately found its way onto a variety of low-cost phones, tablets, and TVs.

Imagination was kind enough to provide a video of Firefox OS running on its MIPS-y fondleslab, and while no one here at Vulture West was wowed by the device's performance, it's nice to see some variety in what has essentially become a commodity product category.

For its initial forays into mobile, Imagination expects to hug the low end of that category. "Think sub-$50 smartphones or sub-$100 tablets," Imagination marketeer Alexandru Voica said in a blog post.

As for when you'll be able to get your hands on this particular device, it's doubtful that Imagination will ever manufacture it in quantity, preferring to leave the making of actual products to its partners.

If you'd like to grab one of the reference prototypes, however, Imagination will be giving away 15 of the devices in the next few days to people who sign up for the raffle on its web page. ®