The Voices: A horror-comedy that’s as schizophrenic as its protagonist 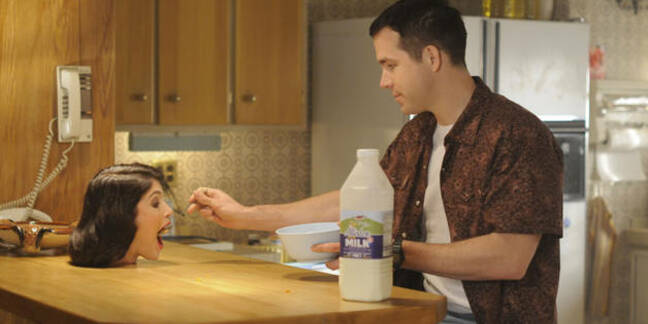 Film Review Horror comedy is not an easy genre-mishmash to pull off, although when it’s done right (Shaun of the Dead, The Faculty), it’s usually brilliant. Unfortunately, The Voices doesn’t quite manage it.

Things start promisingly enough, with Ryan Reynolds as Jerry, the apparently aw-shucks hometown boy who works in the bathtub factory of his small town of Milton. We see the place, through Jerry’s eyes, as a kind of a candyland-Edward Scissorhands vision of happy workers, packing up bathtubs in their spotless pink overalls in unison.

Jerry skips through this (literally) dream job with the occasional butterfly hovering over his shoulder, offering well-meaning but socially awkward conversation and compliments to his co-workers and attempting to fit in by helping to plan the company picnic.

It’s only after he gets home to his foul-mouthed and inexplicably Scottish cat Mr Whiskers and his goofy, loveable dog Bosco that the fantasy takes a dark turn.

While Bosco wants nothing more than to love Jerry and bolster his confidence, Mr Whiskers is something of an asshole, constantly belittling the poor schmuck and reminding him of his many failures.

Oh, and they can talk.

The pets are, of course, the evidence of Jerry’s deranged mind while off his meds, which his court-appointed psychiatrist (Jacki Weaver) is desperately, but ineffectually trying to get him to take. Just why the cat is Scottish – or nearly Scottish, since the accent is done by Reynolds – is never really explained. But he is the devil on Jerry’s shoulder, keeping him off his meds and started down a road paved with murderous intentions.

Once Jerry meets Fiona, the out-of-his-league British hottie in accounting played by Gemma Arterton and her (supposedly) homelier friend Lisa (Anna Kendrick), who thinks he’s kind of cute, things take a turn for the evermore sinister as he quickly loses what little control he had over his violent impulses.

You can see how it’s all meant to play out – the pets are supposed to be funny, the girls quirky and chipper and Jerry’s fantasy overlay on the world gives the whole thing a comic feel. But it doesn’t quite give anything a comedic feel. The pets only manage to hit funny a few times and Mr Whiskers’ Scottish accent is just jarring without context.

Both Arterton and Kendrick have fun with their initial scenes but maybe they’re just too good at acting, because their palpable terror once things turn nasty takes all the fun out of things and leaves you wondering just who you’re supposed to be empathising with. Sure Jerry and Bosco (but not Mr Whiskers) are pretty sorry when things get violent, but does that really mean we’re supposed to be on his side?

Flashbacks to a frankly disturbing childhood and relationship with his mother are also just a bit too real alongside the candy-floss fantasy-land we’re meant to find funny, making the whole thing more bemusing than amusing. And then the film finishes with a random musical number.

That’s 107 bewildering minutes of my life I’ll never get back. ®

Wordsmith gripes about 'another sh*t feature'

Speaking in Tech: Uber and Lyft tell Austin: Hell no, we won't give you the finger

Updated This revolution will not be televised

Is uBeam the new Theranos?