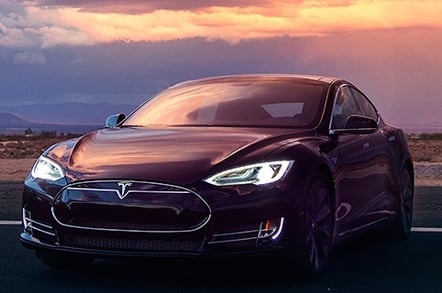 Tesla Motors chief Elon Musk has claimed that an update to the software in his all-electric cars will seemingly magically turn them into self-driving autonomous vehicles.

In a conference call with journalists on Thursday, Musk said that in about three months, Tesla will push out version 7.0 of the cars' operating system, and that it would allow each car to drive from San Francisco to Seattle with little or no need for the human driver to touch a pedal or wheel.

For the moment this will only be enabled on freeways, suggesting the sensors in the front can identify white lines on the road, and keep the car between them, and also sense other vehicles nearby. More super-cruise-control than self-driving robo-car, it seems.

Looking even further ahead, Musk said future updates would include a system to call your car to your location using a smartphone app, and a way to send it automatically into a garage or parking space.

Musk has promised great things in the past, and has a good record of delivering on them. But getting these functions in the car, and getting government regulatory authorities to allow them to be used, makes the self-driving Tesla one of his biggest boasts yet. Strangely, Tesla hasn't responded to our requests for clarification as to how the self-driving system will work.

But today's announcement was mainly about the version 6.2 update which is going to be pushed out to Tesla vehicles over the air in days. This update is designed to make the car much easier to drive without running out of power, with a few safety features thrown in.

"Most cars don't improve over time. By contrast, Model S gets faster, smarter, and better as time passes. With Tesla's regular over-the-air software updates, Model S actually improves while you sleep," Tesla said in a blog post about the latest update.

"When you wake up, added functionality, enhanced performance, and improved user experience make you feel like you are driving a new car. We want to improve cars in ways most people didn't imagine possible."

The new update will add a Range Assurance application which will constantly run in the background when the car is on. This looks at how long the battery has left to run and checks with Tesla's supercharger stations to see which are busy. It will then tell the driver when they need to divert for a battery top-up.

The software will also interact with a Trip Planner application, which picks an appropriate route to your destination taking into account the power available, what charging stations are on the way, and traffic conditions.

On the safety side, version 6.2 adds automatic emergency braking in the event of an inescapable collision to scrub as much speed off the car as possible. There's also a warning if the car is to suffer a side impact, or if there is a vehicle in the Tesla's blind spots that is dangerously close.

Tesla owners can also now set the car in Valet mode, which takes personal information off the car's display screen, locks the trunk and glovebox, and restricts the speed it can be driven to avoid any Ferris Bueller moments.

Other improvements include better radio reception, and improved audio codec for the car's hi-fi, which Musk said gave noticeably better sound quality, and an upgrade to the car's cruise control mode. ®