Said to be GDDY with excitement 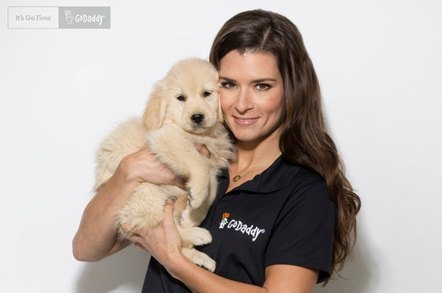 Domain name, registration, web and mail hosting company GoDaddy is expected to be valued at $2.87bn (£1.92bn) when it floats to become a PLC with the stock ticker GDDY.

The US company manages about 20 per cent of the world’s internet domains and has grown through use of attractive women in its advertising, not least Indy racing star Danica Patrick.

The company went for a fluffier tack with its superbowl advertsing by recruiting a Labrador puppy, which it allowed customers to name Buddy.

GoDaddy had sounded out the idea of going public nine years ago, but decided the time wasn’t right. Now it appears it is.

Founder Bob Parsons, who also used to feature in GoDaddy advertising, sold the company to a private equity consortium led by KKR & Co LP and Silver Lake Partners LP for $2.25 billion, including debt. However, he still has equity and while he stepped down as executive chairman in June, he will hold 40 per cent of GoDaddy's class B shares and nearly 24 per cent of class A shares after the offering.

Parsons was replaced by Blake Irving, who was Yahoo's chief product officer from 2010 to 2012. ®

So why are people warning against buying in?

Do you use .home and .mail on your network? ICANN mulls .corp, .mail, .home dot-word domains