Flying cars will take to the skies in 2017, if government allows

AeroMobil wants to be the Google of airborne aviation 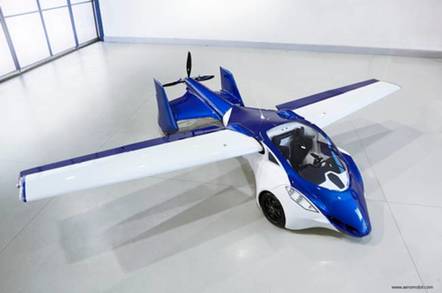 A Czech firm thinks it's finally solved one of the tech world's most desirable objects, the flying car, and says the first consumer vehicles will be ready to lift off by 2017, government regulations permitting.

Speaking at the South by Southwest conference in Austin, Texas, the AeroMobil company founder Juraj Vaculik showed off his third-generation, two-seat hybrid flying car. The vehicle has wings that stow away down the side of the car and a petrol engine running standard gasoline.

As an earthbound car the AeroMobil isn't impressive as its maximum speed of around 99 miles an hour and range of around 545 miles won't excite. But on an airstrip the wings unfold and, powered by a rear propeller, the car will take off at 81mph and cruise at a speed of around 125 mph for 435 miles on a full tank.

The car is capable of taking off and landing on grass, so no new airports would need to be built. Instead Vaculik postulated that grass runways could be built beside roads and drivers could land and join the motorway as though leaving a service station.

It's a cute concept, save for the fact that there's going to be a mass of regulatory detail to work out first. While the AeroMobile has been certified as OK to fly in Slovakia as an ultralight, most governments are going to insist that the driver has a private pilot's license and may add other conditions that could delay a launch.

Then there's the cost. Vaculik said that under the current plans the car/plane hybrid will be priced at around US$200,000 – somewhere between the cost of a luxury car and a private aircraft. That's never going to be a mass market vehicle and, while the prototype is flying, manufacturing in volume still has to be sorted out.

Nevertheless Vaculik is optimistic that the flying car is the wave of the future, and in a decade or so even the piloting could be sorted out. He told the conference that he could see the vehicles going fully automatic in a decade, allowing the owner to program in a destination and let the computer do the rest. ®

Roundup ...while Apple cuts 200 jobs from its car project, and more from the AI world

Happy having Amazon tiptoe into your house? Why not the car, then? In-trunk delivery – what could go wrong?