Congress to do what it does best: make lots of noise 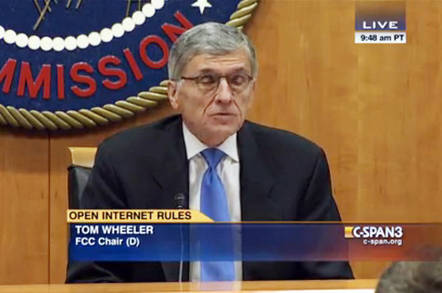 FCC chair Tom Wheeler may have called the passing of net neutrality rules "the proudest day of my public policy career" but he is going to pay for it over the next two weeks.

The former lobbyist for the cable and wireless industries will appear in front of no less than five congressional committees in the next two weeks and can expect a rough reception.

Not only did the net neutrality debate break down partisan lines following the intervention of President Obama back in November but Wheeler dismissed Congressional efforts to draft legislation by pushing ahead with his plans.

The FCC vote fell down to a 3-2 split, with the two Republican Commissioners voting against the rules. And to top it all off, Wheeler turned down requests from the two chairs of the relevant subcommittees in the House and Senate to release the actual text of the rules before they were approved.

In other words, the Republican-run Congress is likely to be out for blood and Wheeler will have to suck it up.

The first hearing will be on Tuesday at the House Oversight and Government Reform. Then on Wednesday, he'll face the Senate Commerce Committee, along with his commissioners.

On Thursday, back over to the House of Representatives and its telecom subcommittee, followed by the House appropriations subcommittee on Tuesday 24 March, before finally appearing in front of the House Judiciary Committee the next day.

A huge array of accusations have been thrown at Wheeler in the past few months, particularly following what appeared to be a sudden change in approach following President Obama's unexpected intervention.

Before Obama's video, Wheeler had been preparing to sell a "hybrid" plan that saw internet access broadly split into commercial and wholesale services. Soon after that plan was scrapped and Wheeler ended up introducing strong regulatory languages under so-called Title II rules.

Republicans view all this is an independent regulator kowtowing to a president, as well as a prime example of government overreach, and the addition of unnecessary regulatory burdens.

How aggressive and unpleasant the questioning becomes however will largely depend on whether the Republicans believe they could get legislation past that would effectively undermine the FCC's rules. To do so, they will need a good number of Democrats to support any such bill to get around an Obama veto. If the questioning becomes too partisan, that Democratic support is likely to dry up.

That said, as always with Washington DC, you can expect the House committees to be full of puffed-up congressmen railing against anyone that disagrees with them and the Senate to manage a more thoughtful policy discussion that the FCC will completely ignore.

Come next Friday though, there is one person who will definitely need a rest: Tom Wheeler. ®