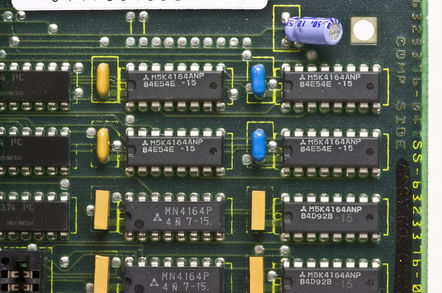 Comment The People's Republic of China is getting heavily into the DRAM foundry business, giving it its own semi-conductor manufacturing fabs and raising the prospect of NAND flash being the next technology to move inside the Great Wall.

It is a NASDAQ-listed fabless semi-conductor company and designs and markets DDR3, DDR2, and SDRAM. Product manufacturing is outsourced to foundries such as TSMC and UMC. ISSI revenues in 2014 were $320m.

DRAM imports cost China $10.2bn in 2014, 20 per cent of global DRAM shipments. DRAMeXchange thinks China’s DRAM market is now the equivalent of two fabs capable of 100K [wafer] productions per month, and that market is expected to grow.

It believes the next step is for China to set up its own DRAM fabs, and five provinces are competing for the location privilege.

The government will then encourage an upstream supply chain to formulate, so Chinese companies can use chips from the fabs, thus cutting out imports from Japanese, US and Korean fabs.

For Chinese suppliers such as Huawei and Lenovo the attractions of Chinese chips will be obvious, and no doubt the Chinese government will encourage their use.

Once China has in-country DRAM fabs then it is a relatively simple step to add NAND flash production, and it could start by buying the flash equivalent of ISSI.

Will it make a further step in adding to its indigenous storage capabilities and move into disk drive production? That would upset the Seagate/Toshiba/WD tripartite hegemony and get the USA fearful about its future dominance of base IT technologies.

If China, with its enormous and growing domestic market, establishes itself as a DRAM, NAND and disk drive exporter, damaging US businesses, then US ideas about the sacrosanct nature of free trade might get revisited.

Right-wing politicians in the future might start to sound the alarm about DRAM dumping by Beijing. They might even complain about the US selling off its family silicon. ®