Cupertino wants to put its pipe to you 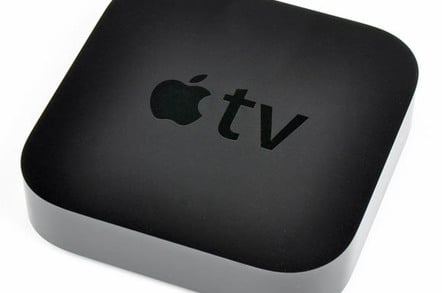 Apple TV users might be getting new channels, and Cupertino some more money, according to insiders in the firm.

The Cupertino giant is in talks to put out a subscription television service with Fox, CBS and the Discovery Networks, The Wall Street Journal reports. Apple is currently part of a conglomerate that includes ABC, Disney and ESPN television networks.

Cupertino has maintained its commitment to the television platform, tying the service into the iTunes brand, and while Apple TV had been dismissed as a "hobby" by Steve Jobs, to Tim Cook it's a $1bn business for the firm.

Apple has also been in talks with Comcast to deliver a US service, though people familiar with the matter said that Cupertino was feeling it was being strung along by the telco.

There'll be an official announcement in June, one source said, with a full rollout to all Apple devices in September, priced at between $30-$40 a month.

An agreement with Fox and Discovery would give Apple a strong partner brand and could put the Apple TV in direct competition with the likes of Hulu and Netflix in the increasingly popular streaming sphere. ®