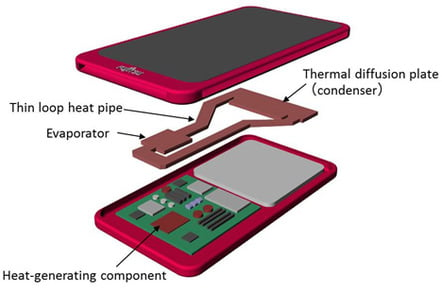 One of the tricks Fujitsu uses to increase density in its M10 family of SPARC servers is liquid cooling. The company's Liquid Loop Cooling offers a closed system to pump coolant around a motherboard, the better to draw away heat.

Fujitsu thinks Liquid Loop Cooling is very cunning but acknowledges that its use of pumps to move coolant about won't work in smaller spaces, like those on offer inside laptops, smartphones and tablet computers, not least because there's no space for a pump and little tolerance for anything that consumes energy.

Enter what Fujitsu's saying is the world's “first loop heat pipe less than 1 millimeter thick.” The loop heat pipe looks like a piece of metal (depicted below), but is rather more intricate. Here's how Fujitsu says the gizmo works:

A loop heat pipe is a heat-transfer device that consists of an evaporator that absorbs heat from the heat source and a condenser that dissipates that heat away, with the two components connected by pipes into a loop. A working fluid is encapsulated inside this closed loop as a coolant. The heat from the heat source evaporates the coolant, and the energy that goes into evaporating the coolant is taken away from the heat source, lowering its temperature. It is based off of the same principle used when sprinkling water on pavement to reduce heat. 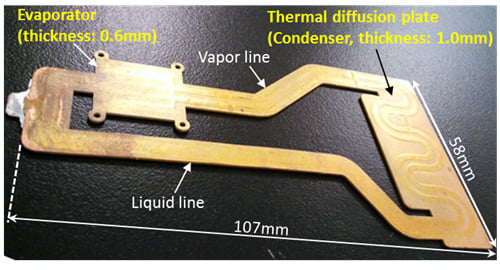 A very thin pipe inside your phone, with liquid coursing around inside – what could go wrong with that?

Fujitsu believes this technology “allows for freedom when designing mobile devices because the patterning is performed by etching metal sheets, meaning that the pipe layout and the amount of heat transferred can be customized for each device.” It's therefore got an eye on “potential applications beyond mobile devices, such as to communications infrastructure, medical equipment, and wearable devices” and feels it should be possible to take a usable version of this technology to manufacturers of such kit in 2017. ®