Lawyer: He's up for that but why the fresh DNA swab? 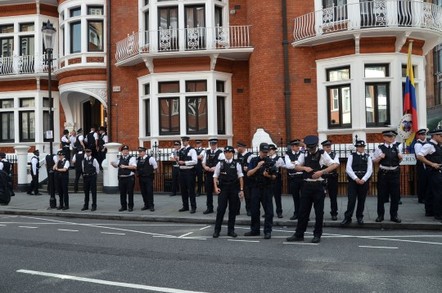 After deadlock for almost three years, Swedish prosecutors have finally agreed to travel to London to question WikiLeaks' co-founder Julian Assange™ on suspicion of sexual offences.

In a statement Marianne Ny, the Swedish director of public prosecutions, reiterated her view “that to perform an interview with [Julian Assange] at the Ecuadorian embassy in London would lower the quality of the interview, and that [Assange] would need to be present in Sweden in any case should there be a trial in the future. This assessment remains unchanged.”

However, as the statute of limitation for his alleged offences expires in August - less than six months' time - Ny views it as "necessary to accept such deficiencies to the investigation".

The statement reveals that if “Julian Assange provides consent to continue the investigation in London, this will be performed by the supporting prosecutor to the case, Chief Prosecutor Ingrid Isgren, together with a police officer.”

Assange is expected to consent to continue the investigation. His lawyer, Per Samuelson told The Register: “This is something we've demanded for over four years.”

When asked if Assange would be willing to meet the request for a DNA sample as well as conduct an interview, Samuelson said: “Yes, in principle, although the prosecutor already has access to DNA from an interview in the UK in 2010. We are unsure why this has been requested.”

The culmination of the Swedish prosecution is unlikely in itself to provide a direct end to Assange's effective detention in the Ecuadorian Embassy as the Metropolitan Police have stated that his request for asylum leaves him in breach of bail conditions imposed on him when he was arrested in London in 2010.

In 2012, then Secretary of State for Foreign and Commonwealth Affairs, William Hague, told Parliament “there is no legal basis for the United Kingdom to meet the request of the Government of Ecuador to grant safe passage for Mr Assange out of the United Kingdom".

A Foreign Office spokesperson told us today that as “we have made clear previously, we stand ready to assist the Swedish prosecutor as required".

Assange is wanted for questioning in Sweden over a single allegation of rape, and three allegations of sexual molestation and illegal coercion, alleged to have been committed against two women during a visit to Sweden in August 2010.

Sweden's chief public prosecutor Eva Finné had initially canceled the warrant for Assange's arrest in August 2010, stating: "I don't think there is reason to suspect that he has committed rape."

However, the case was reinstated by Ny several days later.

The case has maintained a very high-profile due to Assange's position as WikiLeaks' editor-in-chief. Claes Borgstrom, the lawyer representing the two women who complained about the WikiLeaks frontman, has described his placement in the Ecuadorian embassy as an “abuse of the asylum instrument".

Meanwhile, Women Against Rape (WAR) have spoken in defence of Assange, describing the allegations against him as “a smokescreen behind which a number of governments are trying to clamp down on WikiLeaks for having audaciously revealed to the public their secret planning of wars and occupations with their attendant rape, murder and destruction.”

The government of Ecuador, after reviewing and evaluating the arguments presented by Assange in his bid for asylum, decided to offer him diplomatic asylum over his legitimate concerns regarding political persecution.

In January, the Washington Post reported that an investigation into the whistle-blowing platform was ongoing.

El Reg is awaiting a response from the Ecuadorian Foreign Office. ®

Assange's WikiLeaks: Give generously this Xmas – for statue of our dear leader

Steve Jobs gets posthumous Grammy AND a bronze statue

Who knew the iSaint was part of the Staines massive?

Apple biz tyrant to be IMMORTALISED in towering form ... if $50,000 raised

Steve Jobs statue: Ones and ohs and OH NOES – it's POINTING at us