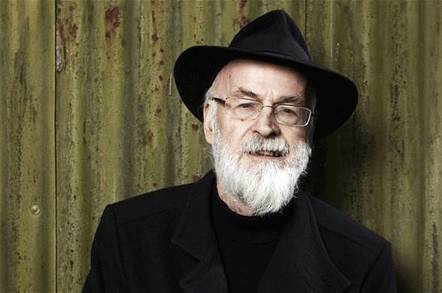 Obit Sir Terry Pratchett has left us at the age of 66, but he has gifted the next generation a massive archive of fiction and non-fiction that will delight, amuse and inform readers for years to come. It's a sad day at the El Reg offices, many of us were devoted fans.

He was born on April 28, 1948, and wrote fiction as a teen. At 17, he started as a trainee reporter on the Bucks Free Press, seeing a dead body on his first day on the job because "work experience really meant something in those days," as he put it.

In 1980, he moved into PR and became the press officer for three nuclear power plants run by the UK's Central Electricity Generating Board. In the evenings, he devoted himself to writing, and in 1983 published the first Discworld novel The Colour of Magic, featuring the recurring characters of Cohen the Barbarian and the cowardly failed "wizzard" Rincewind.

He quit the day job in 1987 to go full time as a writer after the publication of his fourth novel Mort. Sir Terry wrote more than 70 books for adults and children, almost entirely using the Discworld, a flat planet full of magic, oddly bent rules of physics, and Octarine, the eighth color of the visible light spectrum.

In the 1990s, Sir Terry was one of Britain's most popular authors, and put out a steady stream of Discworld novels with such much-loved characters as the witch Granny Weatherwax, Sam Vimes of the Ankh-Morpork City Watch, the Luggage (a homicidal suitcase on legs), the Librarian (a wizard turned orangutan), and Death, the curry-loving scythe-master who met all Discworld characters in the end.

A computer enthusiast since the early days (his first machine was a Sinclair ZX81), Sir Terry wrote all of his books via the keyboard, was a stalwart of CiX (the UK's first bulletin board), and was never without a laptop somewhere nearby. He added Hex to the Discworld as a semi-magical computer capable of great things, and was a keen computer gamer.

He was made an Officer of the Most Excellent Order of the British Empire (an OBE) in 1998, and in 2009 was knighted by the Queen for services to literature. With the help of friends, he mined iron ore from near his home and made his own short sword, and designed a coat of arms with the motto Noli Timere Messorem (don't fear the Reaper).

In total, Sir Terry has sold over 85 million copies of his books, some of which have been adapted for stage and screen. He collaborated with Neil Gaiman to write the superb Good Omens, which was adapted for BBC radio this Christmas, and the Long Earth series with Stephen Baxter.

His fans were many and devoted, and since 1996 held and attended regular Discworld conventions, usually wearing in his trademark black fedora to cover up his expanding bald spot. He was forced to miss last year's due to ill health, but by then everyone knew what was wrong.

In 2007 Sir Terry went public with the news that he had developed early-onset Alzheimer's disease, a form of dementia, which he described as an "embuggerance." He donated more than a million dollars to efforts to research Alzheimer's, and campaigned to highlight the disease, pointing out that it receives a fraction of the funding for cancer research despite dementia being a terminal illness.

He tried a number of therapies to slow the disease, remarking that "personally, I'd eat the arse out of a dead mole if it offered a fighting chance." In the meantime he continued to write using voice-recognition software, and an assistant, finishing his last Discworld novel last summer.

After his diagnosis, he began to campaign for the right of assisted dying, making a BAFTA-winning documentary on the subject titled Terry Pratchett: Choosing to Die. He said his choice would be to die at his home in Wiltshire surrounded by his family with Thomas Tallis's Spem in alium playing in the background.

AT LAST, SIR TERRY, WE MUST WALK TOGETHER.

Terry took Death’s arm and followed him through the doors and on to the black desert under the endless night.

Sir Terry is survived by his wife of 47 years Lyn, and his daughter Rhianna. As the great man himself put it: "So much universe, and so little time." ®