The job's real, you get a personal trainer and unmissable one-second deadlines 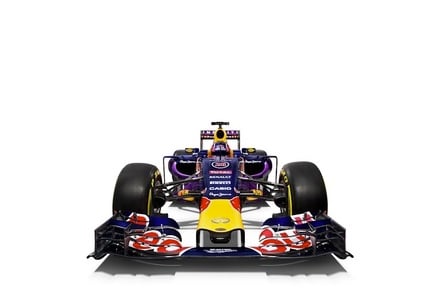 Another day down the salt mines getting you down? Your correspondent's been lucky enough to get out and about today to the first day of the Australian Formula 1 Grand Prix, where I learned about what might just be the Best IT Job Ever: sysadmin and rear jack operator for the Infiniti Red Bull Racing Team's (IRBRT) Formula 1 team.

The gig's not for the slothful: to fill it you'll need to be handy with tech and subject yourself to a punishing fitness regime at the hands of personal trainer and physiotherapist.

You probably know the foundations of this story: F1 teams packs hundreds of sensors into a car in order to measure every revolution of the wheel, drop of oil and puff of wind, the better to make the cars go faster. Which of course means computers galore to collect and process all that data.

In the IRBRT's garage, which I was permitted to briefly tour today, that means there's about three racks full of 8 HP Proliant servers, NetApp storage, UPSes and comms kit. Out on the garage floor, and in a bunker used by engineers, there's a fleet of hefty Lenovo and HP laptops running Windows 7 packing Corei7 CPUs. AT&T's an “innovation partner”* and provides fat pipes that speed 200GB of data from each race to to the team's headquarters in the British town of Milton Keynes. That data gets to the data centre there and back in under 300 milliseconds, so that analytics apps too hefty to take on the road can send back data that might shave a second or two off each lap. That speed's achievable because AT&T pipes traffic over its own networks as far as possible and knows enough about the applications the team runs to prioritise traffic.

Milton Keynes is where the bulk of the team's technologists work, because the rules of F1 limit the pit crew to just 60 people. Al Peasland, the team's head of technical partnerships, listed a bunch of people who get those gigs ahead of technologists: drivers, their personal trainers, engineers, strategists and even the folk who make sure all the logos are painted on the cars get a gig before sysadmins.

But there are two IT workers who score access all areas passes that admit them to the garage on race day. Their jobs sound frantic: once they've set up the portable data centre it's their jobs to keep it running, but also serve as the local help desk for the desktops, mobile devices used by crew, and keep servers and storage humming. One of the two is an IT worker first and foremost but doubles as the operator of the rear jack used during pit stops.

That's a tough gig because the IRBRT reckons it holds the world record for the fastest pit stop ever, and averages 2.5 seconds for a complete tyre change and fuel top-up. The rear jack operator's job is to get the jack in place and lift the car within a second, which means leaping behind the car as soon as it pulls up and finding the small hook on the chassis that grips the jack. That needs to be done within a second or so, because by the time the jack is in place the rear wheels will already have been loosened and crew will be waiting to pop on new ones bearing fresh tyres.

Some motor sports employ dedicated pit crews but Formula 1's headcount restrictions mean plenty of staff have two roles. Which is why IRBRT employs a personal trainer and physiotherapist dedicated to the pit crew, including the mostly-full-time-sysadmin.

Admit it: you want this job. To get it, I'm advised you need to be keen on motor sport, work your way up through lesser formulas and network to make sure you're aware when an opportunity arises.

What are you waiting for? Reg readers: START YOUR ENGINES! ®

*And the source of my flights, accommodation and meals for this story

Android creator Andy Rubin's firm might think its phone is Essential, but 30% of staff are not