Won't someone think of the children? asks pressure group 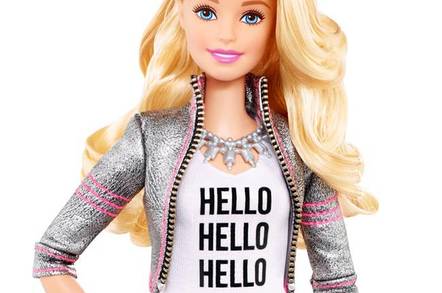 Privacy activists are urging Mattel to axe its Hello Barbie doll, which sends recordings of children's voices across the internet for voice-recognition analysis.

The improbably proportioned doll is fitted with a small embedded computer, a microphone, a speaker and a Wi-Fi interface. When the toy's belt buckle is pressed, Barbie asks a question, and records what the child answers. This reply is encoded and encrypted, and sent over the internet to servers to be processed by voice-recognition software.

That software then sends back a command to the doll to playback a reply stored in the toy. Barbie is programmed with various questions, jokes and quips, which are picked by the backend software in response to whatever the kid wants to talk about.

This is supposed to convince youngsters that Barbie is a kind and thoughtful miniature friend. Meanwhile, the backend systems can email reports to parents on what their tykes are nattering about.

Mattel and San Francisco-based startup ToyTalk developed Hello Barbie, and showed it off last month at the Toy Fair 2015 convention in New York City. At the time, El Reg drilled into the news, and highlighted privacy concerns surrounding the toy. For one thing, recordings of children's voices are stored on remote computers so ToyTalk can apparently improve its voice-recognition engine.

Now the Campaign for a Commercial-Free Childhood (CCFC) has fired up a petition against Hello Barbie, citing The Register's coverage.

The group is upset that the doll will collect a child's private thoughts, and store them on Mattel's systems. This could be used for marketing purposes, and doesn't encourage creative play, the campaigners fear.

"If I had a young child, I would be very concerned that my child's intimate conversations with her doll were being recorded and analyzed," said Georgetown University Law Professor Angela Campbell, a faculty advisor to the school's Center on Privacy and Technology.

"In Mattel's demo, Barbie asks many questions that would elicit a great deal of information about a child, her interests, and her family. This information could be of great value to advertisers and be used to market unfairly to children."

"Computer algorithms can't replace — and should not displace—the nuanced responsiveness of caring people interacting with one another," said pediatrician and CCFC Board member Dr Dipesh Navsaria, assistant professor at the University of Wisconsin School of Medicine and Public Health.

"Children's well-being and healthy development demand relationships and conversations with real people and real friends. Children do not need commercially manufactured messages – artificially created after listening in on anyone within range of Mattel's microphones."

Although the group cites our story, the activists may want to read it again. Mattel's servers don't hold the conversations Hello Barbie records, ToyTalk does, and the startup has stated explicitly that the audio will never be used for advertising purposes.

The SF upstart says it has its eyes on a larger prize: developing an accurate voice recognition system for children. The lion's share of voice-recognition programming has been developed with adult's voices, but kids use a different voice cadences, sentence structures and verbiage.

Hello Barbie is just a prototype at the moment, and is expected to go on sale for Christmas. While it's true that the firm's privacy policy may change by the time the toy hits the shelves, based on our conversations with ToyTalk, it seems set on avoiding Barbie becoming an advertising channel.

Worrying about ads is missing the real issues, we think, which are security and privacy.

It is flat-out wrong to subject children to the need for OPSEC when playing with their toys.

So far the group has collected 1,738 signatures for its petition.

"All of ToyTalk’s products in market have been designed to meet or exceed the Children’s Online Privacy Protection Act (COPPA) and have also been independently verified as such by KidSAFE+," Oren Jacob, CEO of ToyTalk, told The Register today.

"While the underlying technology of our products works much like Siri, Google Now, and Cortana, ToyTalk products never search the open web for answers. Responses are carefully crafted by our own writing team, and conversations recorded through our products are never used to advertise or market to children or anyone." ®