It gave us Comic Sans, Clippy, a zillion jokes and might be CORTANA'S GRANDFATHER 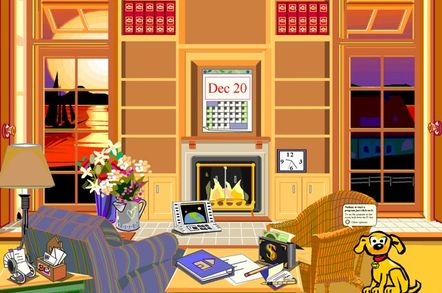 In 1995 PCs were nowhere as ubiquitous as they are today, not least because they weren't very easy to use. Microsoft knew that Windows 3.x wasn't welcoming the rising numbers of first-time home PC buyers: the operating system's unlovely GUI was illogical and unpleasant. Bob was an attempt to give users something easier to understand.

For a time, Bob development ran in parallel with Windows 95. So while Microsoft was working on the Start button it was also coding Bob's cartoon home interface.

The company launched Bob at 1995's Consumer Electronics Show. Bill Gates made his and Microsoft's first keynote appearance at the show to give Bob to the world. Microsoft returned to CES every year until 2011, when Steve Ballmer gave the company's last keynote (to date).

Bob was designed to offer a “social interface” by putting users at ease in a familiar setting: a home. Instead of a desktop metaphor, Bob presented a picture of a lounge room filled with everyday objects. Click on the calendar mounted on a wall and a calendar application would launch. Clicking on the pen and paper opened an app called “Letter writer” that was seen as being just the kind of intuitive interface newbies would like.

To make Bob even more intuitive, users could also place new objects in their virtual home. This feature started to tip Bob over into the nonsensical as all objects could be re-sized. It was therefore possible to put a saucepan in your lounge room and scale it so it obscured all other objects.

There'a video of Gates' Bob-launching keynote here and it makes for fascinating watching.

“We are just at the beginning of social interface,” Gates says, suggesting that future social interfaces will offer assistance on more occasions and “be able to remember everything you have done, to see what you might be confused about, to go and fetch new types of information for you.”

“The appearance of the guide will become even more realistic,” he said, going on to explain “we intentionality chose to use non-human figures in this first generation because we didn't want people to think that we had been able to build the intelligence of another person into that character.”

Gates also said “the whole way you interact with the machine will be different. It will use voice recognition, so-called natural language processing, to be able to understand what you do".

“As you talk to it you will see its lips move and all the emotional responses that it will have will be incredibly rich.”

History tells us those predictions weren't right and that Bob wasn't a breakthrough. The product sold badly, partly because it wasn't very stable (version 1.00a fixed that about nine months after launch) or very good. The timing of its launch was also dreadful: by the time it debuted screen shots of, and hype about, Windows 95 was everywhere.

The Start button turned out to be the on-ramp to mass adoption of computers Microsoft wanted so Bob didn't get much of the limelight once Windows 95 emerged.

Bob therefore hardly rates a mention in Microsoft's official history for 1995. While it remained on sale until 1998, Bob faded from view. It did, however, make it onto some Windows XP disks as filler, according to this article in a Microsoft house magazine.

Bob has earned a reputation as a joke, but was undoubtedly influential. The small dog you see at bottom right in the screen-shot above was the precursor of Microsoft's Office Assistant, aka Clippy. “Rover” guided users through Bob's features in ways that the video hopefully shows were clearly re-used once Clippy appeared in the Office suite.

A second big influence came from the fact that the typeface Comic Sans was designed to be used in Bob. The designers missed the deadline, so it appeared elsewhere. Like Bob, Comic Sans is now regarded as a low point in the history of computing.

Bob's also been influential in a good way and remains so today: some of Gates' early thinking about social interfaces seems to be returning in Windows 10's Cortana personal assistant.

Microsoft recently said of Cortana that “She will learn your preferences, provide quick access to information, and make recommendations personalized for you.”

That's eerily similar to Gates' prediction that social interfaces will “be able to remember everything you have done, to see what you might be confused about, to go and fetch new types of information for you.”

Cortana's even adopted an abstract, cartoon-like form because, as explained at the end of this Microsoft video, the company feels that visual treatment provides a more human connection to a digital assistant.

Bob's still out there on the net: it won't take long to find it or Windows 3.1 to run it in.

Firing both up in a virtual machine isn't hard, but to save you a bit of time I've cobbled together this 28MB .OVA file. It loaded and ran without incident under VirtualBox on MacOS X. We offer it here without any warranty, guarantee, or prospect of support from The Register and in the knowledge it's under copyright. ®

In Junos Space, nobody can hear you patch