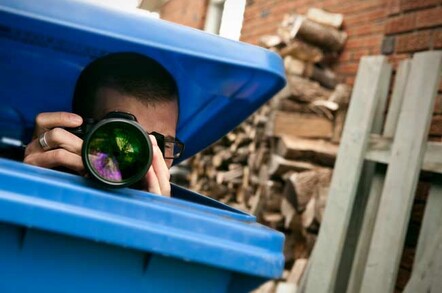 Comment A Supreme Court decision handed down on Wednesday has given carte blanche to police forces to retain personal data they have collected for virtually any purpose and hold it as long as they like – even when the people targeted are not violent and have committed no crime.

The case, R (on the application of Catt) (AP) (Respondent) v Commissioner of Police of the Metropolis and another (Appellants) (available here, PDF, 33 pages), was an appeal against a 2013 decision dismissing a case against police retaining data about people not convicted of any crime.

“A particular feature of the data in question,” wrote Lord Sumption in the leading judgment, “is that they consist entirely of records made of acts of the individuals in question which took place in public or in the common spaces of a block of flats to which other tenants had access. The information has not been obtained by any intrusive technique such as bugging or DNA sampling.”

John Catt, a 91-yr-old Brighton man, had lodged a legal claim against the police for keeping records about his attendance at various political protests going back a decade. While he accepted that the creation of the records was lawful, he objected to the information being retained on police databases long after the protests had passed.

The police justification was that he sometimes attended protests with “Smash EDO”, a violent group. Catt himself was not violent, a fact the police accepted.

A 2013 Court of Appeal decision held that the police's actions were unlawful. They in turn appealed to the Supreme Court to overturn that decision.

While the creation of the records against Catt was an obvious interference with his human rights (under Article 8 of the European Convention on Human Rights), said Lord Sumption, the question to be decided was whether it was justifiable. Briefly, he held that it was – and that's where the problems start.

Lord Sumption's main argument was that the retention of data for “police purposes” was inherently lawful, despite the obvious problem of that being a very broad and vague definition. Provided the data was “regularly reviewed” for deletion – even if it wasn't actually deleted – that was enough justification to keep records against a 91-year-old man whose only "crime" was to be near others who were violent at events he attended.

“Most intelligence is necessarily acquired in the first instance indiscriminately,” wrote the judge. “Its value can only be judged in hindsight, as subsequent analysis for particular purposes discloses a relevant pattern. The picture which is thus formed is in the nature of things a developing one, and there is not always a particular point of time at which one can say that any one piece in the jigsaw is irrelevant.”

As we know in Britain, this doesn't happen when it's inconvenient for the police. In the aftermath of the fatal shooting of Brazilian electrician Jean Charles de Menezes aboard a Tube train by anti-terror police in 2005, CCTV cameras covering the platform at Stockwell station were variously reported to be faulty, or not feeding into the recorder, or had simply gone missing after being seized by the police.

Lord Sumption's reasoning goes even further down the slippery slope of authoritarianism when he decrees that removing the data of innocent people from police databases would be “disproportionate”:

Even if it were consistent with the purpose and proper use of the database to exclude people like Mr Catt from it, the labour involved would be disproportionate to the value of the exercise to them. The current weeding process in relation to nominal records involves an assessment of the threat posed by the subject of each such record. Mr Catt is not the subject of a nominal record, but merely appears as part of the cast in incidents with which the subjects of nominal records are associated.

Except, as police actions in a case heard alongside Catt's appeal shows us, the police are quite happy to delete such records – especially when they know retention of those records is indefensible.

A single unsupported allegation and the Supreme Court

A Ms T was alleged to have made a homophobic comment about her neighbour. Police arrived, took statements and issued her with a “prevention of harassment” (PoH) letter. This is a piece of paper, for which the police have no legal authority to create or enforce, which can be used in court as evidence that a “course of conduct of harassment” took place. PoH letters can be issued before any serious investigation has taken place.

The Guardian has previously noted that PoH letters “save the police money” by helping them avoid the need for a proper investigation. Just issue the letter, arrest after a second allegation, job done – in the police's eyes, it would seem, anyway.

As there is no law regulating the use of PoH letters, police forces use them as an extra-judicial means of shutting up people who individual police employees take a dislike to. The most high profile case of such abuse is that of Gareth Davies, chief reporter of the Croydon Advertiser newspaper, who emailed a convicted fraudster to ask her for comment on fresh allegations against her.

Three police employees turned up at his newspaper to serve him with a letter, written by one Inspector Clare Robbins who evidently thought contacting the conwoman Davies was reporting on amounted to harassment. As a result, Davies now has entries against him in police databases alleging that he has committed criminal offences when any normal person can see that that is not true. There is no power of appeal against PoH letters.

Next page: How the police evaded judicial scrutiny by destroying records
Page:
Tips and corrections
129 Comments