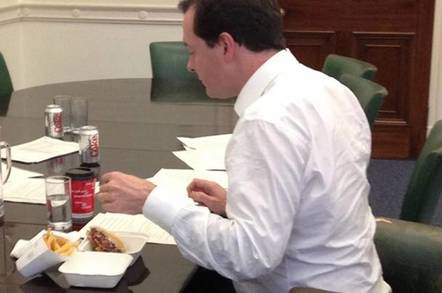 The so-called "Google tax" crackdown will reportedly be a highlight of the thin-lipped, Number 11 occupant's final budget before the General Election, which takes place on 7 May.

According to the Sunday Times (£), Osbo plans on 18 March to bring in a "punitive 25 per cent levy" to crackdown on the likes of Google, Amazon and Facebook – all of whom have been accused of channelling their profits elsewhere to dodge higher tax payouts in the UK.

The chancellor's proposed "Google tax" would be higher than the 20 per cent corporation tax rate that will be applied from this April.

Firms, which appear to have dodged HM Revenue & Customs (HMRC) by channelling their money overseas, will be slapped with the "diverted profits tax".

The Times added that companies with a turnover of less than £250m were likely to be exempted from the apparent tax crackdown.

At the time, the proposed law said that tech giants – many of whom are based in Ireland due to the country's low corporation tax of 12.5 per cent – would have to "self-report" any diverted profits to HMRC and then defend their own activities. ®