Boffins say Mars had ocean covering 20 per cent of planet 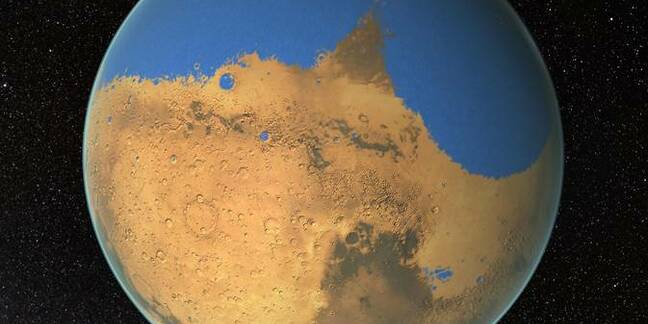 NASA boffins have popped out a new paper, Strong water isotopic anomalies in the martian atmosphere: Probing current and ancient reservoirs, in which they advance a theory that Mars once had substantial oceans.

The theory outlined in the paper relies on measurements of the types of water found on Mars.

Yes, we do mean “types” because Mars, like Earth, houses plenty of H2O but also plenty of water in which the Hydrogen is an isotope called Deuterium in which a Neutron is present. The extra particle gives rise to the name “heavy water”, a well-earned name because it is heavier!

That weight is important because heavy water is thought to remain in gravity's grip after lighter, normal, water drifts away.

Meteorites thought to have been broken off Mars in the deep past offer clues about the ancient heavy:normal water ratio on the Red Planet. Comparing that ratio to the heavy:normal count observable now gave boffins the chance to guess at how much normal water has been lost.

Their answer: enough water to cover around 20 per cent of the planet at Mediterranean depths. Mars' northern plains are the planet's lowest bits, so the water probably gathered there.

The thing that has boffins most excited about this theory is that, if correct, it suggests Mars had liquid water for more than 1.5 billion terrestrial years. That's far longer than it took life to evolve on Earth, raising hopes the Red Planet also hosted organisms of some sort. 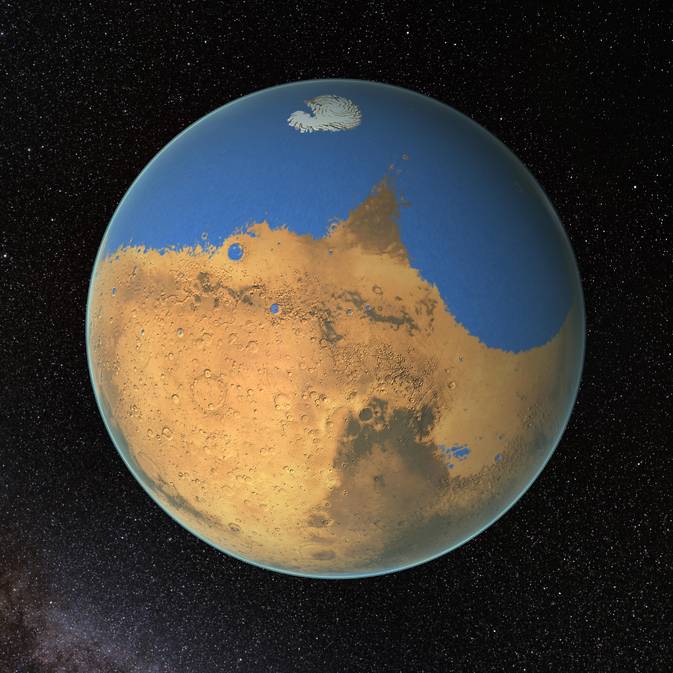 NASA boffins thinks this is what Mars' oceans once looked like

As it happens, NASA this week also named the Elysium Planitia as the target touchdown site for its next Mars lander. Mars Insight will launch in March 2016. Sadly the Elysium Planitia looks not to be in the former oceans, as it is just four degrees north of Mars' Equator.

NASA's keen on the site because it is “smooth, flat, with very few rocks”, just the ticket for the Interior Exploration using Seismic Investigations, Geodesy and Heat Transport mission's goal of investigating Mars' interior. ®