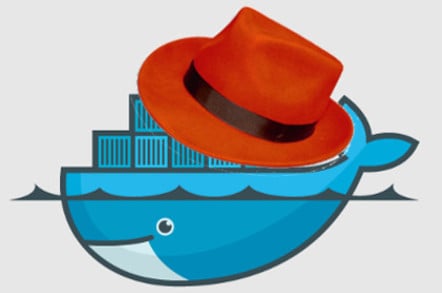 Red Hat Enterprise Linux 7 Atomic Host was first announced at the Red Hat Summit in San Francisco last April and it has been in beta testing since November.

Shadowman isn't the first Linux vendor to latch onto this idea. That credit should probably go to CoreOS, which declared its micro-sized, container-centric Linux distro a production-ready product in June. More recently, Canonical also released a small-footprint variant of its own distro in the form of "Snappy" Ubuntu Core.

What these and similar distros share in common is that they do away with the "everything and the kitchen sink" approach of old, opting instead to provide the bare minimum of components necessary to get the system up and running. From there, admins add only the applications and services they want, which come packaged as containers.

What differentiates RHEL Atomic Host is that it's based on full-fat RHEL – meaning it will run the same applications on all of the same certified hardware as its larger sibling. This first version provides all of the components needed to package and run applications written for RHEL 6 and 7 as containers.

Updates for Atomic Host are provided via an "image-like" mechanism, where updates are applied in a single step and the system can be rolled back to its previous state if necessary.

Container orchestration is handled via Kubernetes, the open source container control freak that has its origins in Google's homegrown cloud infrastructure technology.

RHEL 7 Atomic Host is available now to Red Hat subscription customers. A trial version that doesn't receive updates is also available, and Red Hat says it will host a virtual event on March 12 to discuss how this new flavor of its RHEL can benefit customers.

If containers aren't your bag, on the other hand, and you'd rather stick with a Linux modeled after the tried and true monolithic distributions of old, Red Hat still has you covered. Simultaneous with the general release of Atomic Host, Shadowman also took wraps of RHEL 7.1, the first minor update of its flagship enterprise Linux distro.

This release includes improved support for Windows file and print services in Active Directory environments, client-side support for Ceph block storage, new authentication and access management options, and higher processor and memory limits, among other enhancements. It also bundles the same container-management tools that come with Atomic Host and it includes OpenJDK 8.

Full details on what ships with RHEL 7.1 are available here. ®