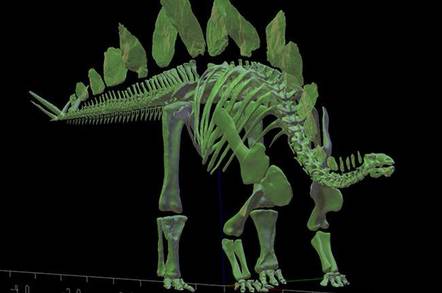 Pic + vid Scientists at the Natural History Museum have used 3D models to work out what its famous Stegosaurus would have weighed when she was alive. And the answer is: a lot.

The dino exists today at the London museum as a skeleton nicknamed Sophie after the daughter of the hedge fund manager who bought the ancient bones. It is the most complete Stegosaurus skeleton yet found, with more than 85 per cent of its bones recovered.

"Because this incredible specimen is so complete, we have been able to create a 3D digital model of the whole fossil and each of its 360 bones, which we can research in excellent detail without using any of the original bones," said Dr Charlotte Brassey.

The team fleshed out the skeleton by taking models of muscles and other tissue attached to bones on animals today, and applied those to Sophie's skeleton. That produced a weight of about 1,600 kg (3,527 lb).

The boffins also tried the traditional technique of measuring the dino's leg bones to calculate its weight.

The output of the two calculations differed significantly: the leg measurement method suggested Sophie weighed far more than 1.6 metric tons, but the formula assumes the dino was fully grown.

At 5.6 metres long, and 2.9 metres tall, she's a relatively small beast, and probably an adolescent. When you take that into account, the leg-measurement-based weight estimate drops considerably, bringing the two weights into alignment.

"Dinosaurs are related to modern birds and crocodiles, but their anatomy could have been quite different in some cases,’ said Dr Brassey.

"The main muscles that would be used to pull the hind limbs backwards would have been pretty large and would have attached quite far down the tail. Combined with its wide hips, it’s fair to say this Stegosaurus probably would have had quite a large rear end."

We won’t be able to know for sure until someone invents a time machine and goes back 150 million years to when Sophie was roaming the landscape in what is now North America. Her remains were discovered in 2003 at Red Canyon Ranch in Wyoming by paleontologist Bob Simon.

The skeleton was shipped to the museum last year and for nine months the bones were photographed and x-rayed with computed tomography. The collected data is proving most useful in working out how these animals lived.

Sophie had a brain the size of a small tangerine, and the 19 plates along her back are quite thin, suggesting they weren't used for defense. Instead, the scientists think they could have been used to regulate Sophie's temperature or possibly for mating displays.

The skeleton is now on display at the museum, big behind and all. ®

A hidden treasure in piles of dusty old bones