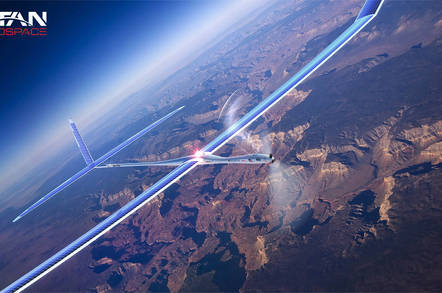 After a couple of years of selective reveals to favoured media, Google has made an uncharacteristic to-all-comers announcement about its broadband plans at Mobile World Congress in Barcelona.

The Chocolate Factory bought drone-maker Titan Aerospace in 2014, and has told the conference its solar-powered drones will be carrying radio kit over Internet-less communities within a matter of months.

Given the design of the drone, it's not easy to see how it could “hover” as The Verge somewhat quaintly puts it, however prior to its acquisition by Google the company's Website described its aircraft as “atmospheric satellites”, designed to fly at nearly 20 km altitude (65,000 feet) for weeks at a time.

Google senior veep Sundar Piachi told the conference that drones are easier to control than balloons.

Gigaom reports Piachi also said the Chocolate Factory will be announcing a mobile virtual network operator (MVNO) in the coming months – not with the aim of large-scale resale of carrier services, but to help it demonstrate Android features it wants carriers to adopt. ®