Insight: Have you heard about Windows Server 2003 support? 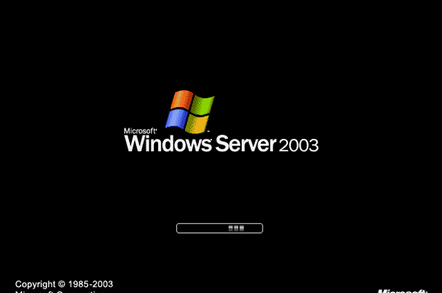 As organisations using Windows Server 2003 march - perhaps with ill-found confidence - toward the expiry date for Microsoft support, Insight Enterprises has scare stories galore warnings for them.

The software licence and box slinger reckons it has identified five “key problems” that will give sysadmins sleepless nights and worse when Microsoft pulls support in 134 days, seven hours…

In at one: Insight says server upgrade projects can take up to 18 months, but just four remain until WS03 D-day - and apparently hackers are tightly coiled, waiting for some sort of security meltdown. Apparently.

“As a consequence, compromises may be made on planning and assessment, and upgrade migrations could be based on false assumptions. Without proper due diligence, the extent of the server environment and criticality of applications are likely to be underestimated, resulting in instability and disruption”.

Gartner reckons the average migration takes between nine and 15 months, though distributors recently told us that for SMEs the length is closer to three to four months.

Another “key” problem techies may encounter is “compromised coalitions”, caused by the impact of “untended consequences leading to short-term patches”, which “in turn lead to power struggles”.

Sounds like another sort of coalition, not too far from the current UK government.

“Resources will need to be allocated for migration for which no provisions have been made and thus may cause friction between departments and staff,” the company continued.

A lack of consistencies and co-existence between old and new servers and the conflict this may create is third element of the sales pitch list of concerns.

“Interoperability between users, directories and security settings will create flash points over the networks and resources,” Insight said.

The relatively short window to get ready for WS03’s support demise means “many” user organisations will “fail to back up comprehensively” before migrating, and will “inevitably lose data”.

Last, and possibly least, is what Insight terms as "ungovernable new environments"; many organisations will have failed to “optimise” the shiny new upgrade in the rush to replace WS03, so haven’t set “ground rules or established “new foundations”.

According to HP in December, there are 400k physical WS03 servers still running in the UK, and 900k instances. One in five users will miss the 14 July deadline, integrator Avanade told us previously.

Microsoft is officially charging customers at least $600 per server per year for custom support when the extended version runs out, so it's a potentially costly game that user organisations are playing.

Twenty patches were issued by Microsoft last year, but Gartner reckons the danger for organisations running unsupported wares gets more serious if they do so for a prolonged period of time.

Insight is right about one thing though: support for WS03 is ending. ®