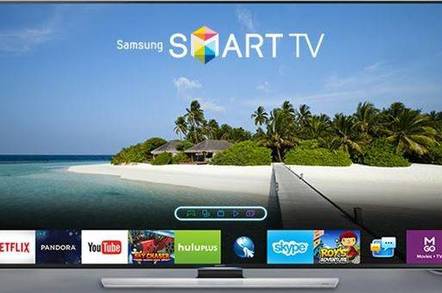 The Electronic Privacy Information Center (EPIC) has lobbied the US Federal Trade Commission (FTC) to investigate Samsung's collection of user information in its Smart PCs.

The group filed a formal complaint with the FTC alleging that Samsung is misleading its customers and running afoul of the US Electronic Communications Privacy Act and Cable Communications Policy Act.

At the heart of the debate is the voice command functions on Samsung's SmartTV models. The company says in its privacy policy that the sets will collect user speech commands and transmit the information to a third-party voice recognition service, Nuance Communications.

According to EPIC, this fact is not made clear enough to consumers, and many are left not knowing that their conversations could be remotely captured and transmitted by their TV sets.

"When the voice recognition feature is enabled, everything a user says in front of the Samsung SmartTV is recorded and transmitted over the internet to a third party regardless of whether it is related to the provision of the service," EPIC argues in its complaint.

Additionally, the complaint alleges that Samsung does not properly encrypt the voice inputs before transmitting them, potentially putting the information at risk of being intercepted by an outside attacker.

The EPIC complaint includes a list of comments from users expressing anger about the practices. While public opinion isn't exactly legally binding, EPIC hopes that the comments show that Samsung has indeed come up short in terms of notifying its customers of what information the sets can record and transmit.

The group is asking the FTC to investigate and prosecute Samsung for what it calls "unfair and deceptive voice collection and transmission practices".

Samsung, meanwhile, maintains that it has done nothing wrong. The Korean consumer electronics giant passed a statement to The Reg disputing the claim:

The claims made by EPIC are not correct and do not reflect the actual features of our Smart TV. Samsung takes consumer privacy very seriously and our products are designed with privacy in mind.

EPIC has not said whether it will be pursuing similar claims against other manufacturers. ®