Phial of Winnie's boozy fluid up for auction 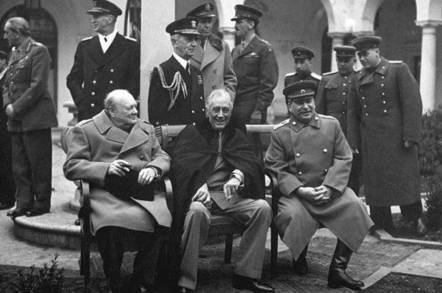 The blood circulating in Winston Churchill's veins was worth around £560,000, on the basis of a valuation placed on a small phial of it being auctioned next month.

Dukes Auctions is estimating the phial of his blood obtained by a nurse in 1962 could fetch £1,000, although a spokeswoman from the auction house said that due to the age of the specimen it now resembles a congealed orange-red blob.

However, when it was originally taken, the phial may have contained around 10 milliliters of the red stuff.

So, if the original sample was around 10ml (a standard phial measure), then an entire pint of Churchill's blood would be fill around 56 small phials, which could fetch up to £56,000.

The average human contains 10 pints of blood, meaning (according to El Reg's back-of-a-envelop calculation) an entire body's worth of Churchill's blood would be worth £560,000.

But its unclear just how much of that would have been booze, given Winnie's penchant for champers, claret, and old brandy.

Churchill was a notoriously heavy drinker, and in the 10 years of before he died in 1965 he reportedly drank more than ever, keeping to a strict regime of one bottle of champagne for lunch and one for dinner before moving gently into the main-evening boozing.

One visitor from the period noted: "There is always some alcohol in his blood, and it reaches its peak late in the evening after he has had two or three scotches, several glasses of champagne, at least two brandies, and a highball ... but his family never sees him the worst for drink."

El Reg wonders how much our current leaders' blood would be worth. ®