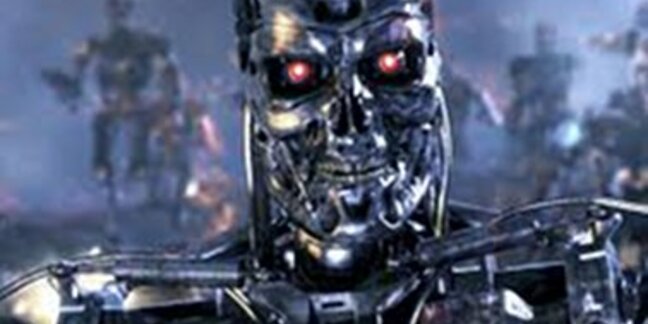 The US Army Research Labs (ARL) has put forward a plan to outrun China in the supercomputer stakes, develop quantum computing, and create The Terminator.*

In spite – or perhaps because – of a likely budget squeeze, the ARL says it needs to “harness the potential of computational sciences and emerging high-performance computers (HPC)”.

The Army's Technical Implementation Plan (PDF) calls for the petascale system to be in place before 2019.

There's also a focus on big data to support its “information dominance” as well as helping manoeuvres and, in a line that could appear in a “who said it, a TED speaker or North Korea?” quiz: “significantly increase and tailor advanced computing architectures and computing sciences technologies on the forefront to enable land power dominance.”

A Tactical HPC initiative calls for a 100 petaflop battlespace computer, which the ARL wants to provide realtime processing for soldiers “operating at the tactical edge”, as well as supporting autonomous systems and providing “real-time data analysis for soldiers and intelligence analysts”.

Its capacity would be nearly double that of the current world leader, China's Tianhe-2.

“Tactical cloudlets” will marry the computing capabilities in soldiers' kit with “mobile customised HPC platforms operating at the tactical edge”.

Quantum technologies get a nod, with the Army planning to snare researchers to follow quantum networks and quantum annealing (the technique claimed by D-Wave), as well as bio-computing and neuro-synaptic computing architectures. ®

*Bootnote: OK, we made that bit up. The plan does, however, call for the computing power to be applied, among other things, to developing new materials for better battlefield uniforms, for better “lethality, protection, electronics, power, and dismounted Soldier gear”. ®