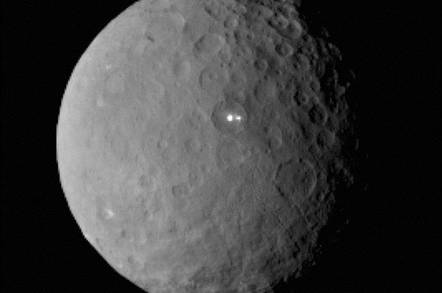 The Dawn spacecraft sent by NASA to investigate the asteroid belt's largest bodies has spotted a second bright spot on the surface of Ceres, sparking speculation that the dwarf planet might be significantly stranger than first thought.

Dawn is slowly approaching Ceres using its ion drive to match orbits, and its latest pictures were snapped from a distance of about 29,000 miles (46,700km) away. A bright spot was spotted on the surface by the Hubble telescope in 2004, but Dawn's closer look shows there are two distinct reflective areas.

"Ceres' bright spot can now be seen to have a companion of lesser brightness, but apparently in the same basin," said Chris Russell, principal investigator for the Dawn mission, who is based at the University of California, Los Angeles.

"This may be pointing to a volcano-like origin of the spots, but we will have to wait for better resolution before we can make such geologic interpretations."

Ceres is one of the more peculiar bodies in our Solar System. It was first thought to be a planet in its own right but was later categorized as a dwarf that forms part of the asteroid belt between Jupiter and Mars.

The 590 mile (950km)-wide object accounts for around a third of all the mass of the asteroid belt and could even have a weak atmosphere. It is also thought to be rich in water and the NASA team is considering the possibility that the reflective spots are in fact frozen lakes reflecting the Sun's light.

"The brightest spot continues to be too small to resolve with our camera, but despite its size it is brighter than anything else on Ceres. This is truly unexpected and still a mystery to us," said Andreas Nathues, lead investigator for the framing camera team at the Max Planck Institute for Solar System Research.

Dawn will enter orbit around Ceres in March after an eight-year voyage and will use the mini-planet's gravity to enter into orbit around it. The probe will then spend the next 16 months sending back data on Ceres using a visible and infrared thermal-imaging spectrometer, a 66 megapixel camera, and the Gamma Ray and Neutron Detector (GRaND).

Unless funding continues, the Dawn mission will then end, leaving the dwarf planet's man-made satellite in orbit for the foreseeable future. ®