Revenue, ARPU and capex all on the rise

It's a matter of ups and down for the National Broadband Network: the fibre rollout (which will be replaced by hybrid fibre/coax (HFC) and node/basement fibre in future geographies) accelerated and the activation rate improved.

At the same time, a host of factors (such as a construction focus on adding lead-ins to homes formerly counted as passed but without any way to connect to the customer, and rebuilding the NBN Co's contractor relationships) have driven up the company's spend, with it reporting an EBIT loss up 20 per cent ($AU776 million), although EBITDA loss is only up four per cent ($497 million).

Revenue rose $AU64 million to on the back both of the growth in customers and in ARPU (which rose to $AU39 – another measure that whose growth was always predicted under various NBN corporate plans). 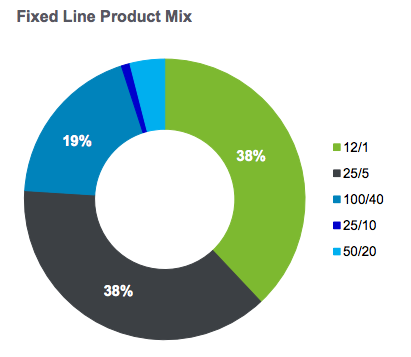 15 Mbps would be good enough for some of us: Speeds of connections bought on NBN Co's fixed network at December 2014

CEO Bill Morrow was most keen, however, to pitch the NBN's future once the business of on-boarding the Telstra and Optus customers from the asset he said NBN Co got “virtually for free”.

This won't be reflected in NBN Co's connection figures until well into 2016, but already Morrow said, the company is seeing in excess of 370 Mbps down and 49 Mbps up on DOCSIS 3.0 kit.

Taking advantage of more the the available HFC spectrum, and ultimately deploying DOCSIS 3.1 will give speeds another kick along.

However, while Morrow said less than 10 per cent of the customers in the HFC footprint are in the “infill areas” (those areas that within the overall footprint that simply aren't passed – for example because Telstra skipped a street), it's less clear how many lead-ins will be required so that all homes in the HFC footprint can be considered serviceable.

Morrow could only state that the company expected this to be a small proportion of homes.

Neither will this year's figures show any significant impact from the rollout of fibre-to-the-node or fibre-to-the-basement, both of which will start reaching scale in 2016.

Morrow forecast a first product release for FTTN covering around 200,000 homes in the July quarter of this year (that is, the first quarter of financial 2016).

He expects 2,000 buildings to be FTTB-ready “this quarter” and added that the product launch is “imminent”.

With all 121 points of interconnect in the transit network now complete, Morrow said the focus on any future capex in that party of the NBN will be in response to growing demand from retail service providers.

In the fixed wireless space, Morrow noted that the network that has been rolled out is capable of 50 Mbps (down) services, and that NBN Co is not planning to add that speed tier to the wireless services.

While there have been delays to the long-term satellite services, Morrow said the first satellite is still expected to be launched during 2015, with products to be released during 2016. ®