Reg reader up in arms about bundled bloatware 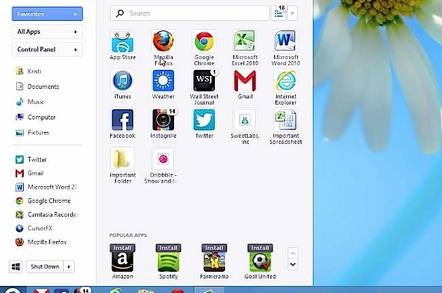 As Lenovo struggles to extricate itself from the controversy surrounding pre-installed Superfish scumware on its machines, a blast of cruft from the past may give the PC slinger's critics extra ammo this week.

A Reg reader, who wishes to remain anonymous, reminds us that Lenovo is still shipping laptops with a potentially unwanted program called Pokki Start Menu installed. Our reader claims the software is causing all sorts of problems, as he explains:

We've just taken delivery of a number of Lenovo laptops, all of which were experiencing difficulties connecting to a corporate system which I'm the administrator of. The client software would log in, but then it would immediately panic and drop the connection to the server.

The laptops were passed to me to diagnose the issue. None of them had Superfish installed. Instead they had a piece of software called Pokki, which looks suspiciously like adware designed to push more adware on unsuspecting users.

Our client software works as normal once Pokki is removed – although we'll be wiping the laptops and installing from scratch now.

We relayed these concerns to a Lenovo rep, who told us: “We are looking at this as a priority.” We’ll be sure to update this story as and when we hear something more substantive.

Lenovo hired developer SweetLabs to add the Pokki suite to its Idea and Think lines of kit as far back as 2013. Pokki adds a classic Start menu to Windows 8, helping out users who dislike the Metro user interface and want the traditional menu back. (Windows 10 has resurrected the menu, for what it's worth.)

The Pokki menu includes an app store of sorts, inviting people to install stuff like games and other tat, and it will display tweets and other notifications. It's mainly there to tout SweetLabs' Windows application shop, leading some to write it off as bloatware, or worse. It can be, depending on how savvy you are, tricky to uninstall.

SweetLabs claims more than one million apps are installed a day via its software, which is bundled on selected Lenovo, Acer, Toshiba and HP hardware.

It's worth pointing out that our reader is not the only one upset about Pokki on Lenovo kit. Complaints can be found here and here on Twitter. A non-exhaustive search of tweets also turns up the occasional Pokki fan. “I’m grateful to Lenovo for shipping it with the truly awful and difficult to remove Pokki Start Menu because man, I love stuff like that,” said one sarcastic user.

Discussion threads on the Lenovo support forum (here) and Malwarebytes forum (here) have been opened by users asking how to rid themselves of the software or questioning its presence. The program, according to shouldiremoveit.com's stats, is deleted within 10 days of use, on average.

Demos, trial software and other bloatware bundled with machines helps manufacturers tuck a few more dollars into the wafer-thin margins of their PC sales. Since the Superfish controversy exploded, punters have made it clear they are sick and tired of even a hint of screen-invading, privacy-violating, processor-slowing and security-threatening scumware on their computers. ®

Pokki representatives have now told the Register that:

Pokki does not intercept any network traffic or interfere with the networking stack, nor does it modify proxy or networking settings.

The company says it is happy work with users to sort out any issues they may be having. However it seems likely that most will simply remove Pokki.