For pity's sake, you fool! DON'T UPGRADE it will make it worse

Mr Dabbs, you are incompatible with today's IT world :) 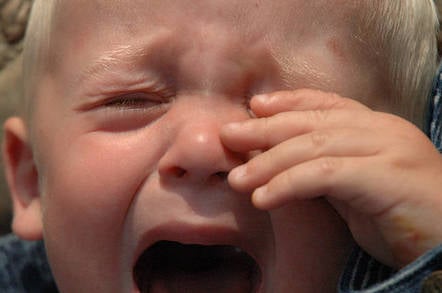 Something for the Weekend, Sir? It’s decided: I am going to be an actor. Apparently, actors have better sex lives than any other profession. In fact, according to the press release in front of me, they shag 550 per cent more often than bankers.

Oh, hang on. The survey didn’t quote “actors” exactly, it said “those in acting and performing”. Given that some of those “performers” could be sex workers servicing clients ten times a night (plus matinees), it could be that the statistics are skewed. In reality, my bank manager could be enjoying more action than Benedict Cumberbatch, Chris Hemsworth and Brad Pitt; even Widow Twankee.

But what about those who combine sex work with acting, such as those playing the part of willing young libertines with a penchant for smelly old grey-haired, pot-bellied French economists? Talk about getting the rough end of the stick. That’s not a job I fancy much myself: to tell the truth, I can’t be arsed.

There must be another career out there for me. IT’s rubbish. With increasing frequency, I find myself wondering what it must be like to work in a proper industry that doesn’t keep changing all the time. Hey, I’m all for progress and development, but the IT industry’s like a giant with its head always peering over the horizon while its legs stagger about in the mud.

If IT was a kettle, disruptive technologies would have rendered it incompatible with water before it even had the chance to boil.

OK, I confess, I’ve been having a bad week with upgrades. It began when Kaspersky issued its final reminder that I had to renew my Internet Security subscription otherwise the nasty outside world would come and get me. Yes, I know Kaspersky isn’t the brightest AV kid on the block but it sells inexpensive family packages to cover every computer in the house, along with those that aren’t. This is important when master, wife and chattels are playing around in various flavours of Windows, Mac OS, Linux and Android (and iOS but Kaspersky don’t bother with that).

Thank you for your reminder, Mr K, I’ll renew for another couple of years if that’s all right. What’s that? The renewal recommends that I update every computer to the latest version of KIS? No problem.

Yes problem. Having done as I was told (an update, hooray!) KIS no longer works on one of my computers (boo!) It’s a bit old, you see, but it’s a perfectly serviceable computer and runs plenty of powerful applications without trouble. Come to think of it, the only piece of software it is unable to run is … the latest version of KIS. If KIS knew it was incompatible with my cranky old early 21st century difference engine, why did the bloody thing let itself be installed in the first place?

I uninstall it and try to re-install the previous version from my backup but that doesn’t work. I look for a download but all traces have been removed from the Kaspersky website. Only after three days of Chuckle Brothers with the support desk am I finally allowed access to the hallowed FTP Server of Obsolete Versions.

While this is going on, my wife’s principal customer has decided to upgrade its systems (hooray!) to ensure maximum incompatibility with its suppliers (boo!) To be fair, this company – a translation agency – has spent the best part of a year preparing for the change by sending her nosey questionnaires insisting that we reveal everything about our computers, routers, AVs, firewalls, bust size and inside leg measurement. Having gathered this information, possibly having a few laughs along the way, the company went ahead and commissioned developers to produce a system that we can’t access.

During development, my wife was even invited to try it out. Error. Try again. Error. She duly reported that it didn’t work and the developers duly filed the report in the shredder.

This week was the big switch – or more accurately, the big switch-off. From one day to the next, it has become impossible to download any files to work on, each attempt producing some kind of XML incompatibility error.

For the first day, my wife had to deal with the usual nonsense while a Support Minion sitting behind Zen Desk trudged through the basics, step by excrutiating step. Are you out of bed? Are you standing up? Do you have motor function in your arms? Can you find your computer unaided? Do you have electricity supply to your house? Is the computer switched on? And so it continued until day two came around and we moved on to the clicky bits.

Day two was mostly occupied with the Support Minion asking my wife to click on things she’d already been clicking on and to type things she had already typed. At some point late in the afternoon, a red light might have lit up at Minion Central: “Are you running Windows 7 or 8?”

Neither, replied my wife, this is an iMac.

Very interesting, said my wife, but how do I make it work with my iMac?

My iMac is an iMac.