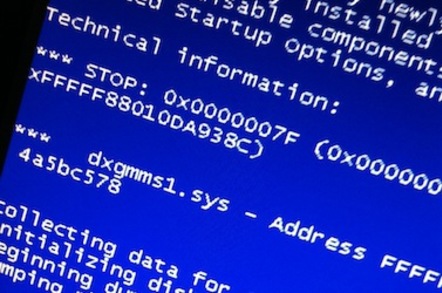 Updated Encrypted disk users who upgrade to Norton 2015 have been confronted by the dreaded Blue Screen of Death.

Norton 2015 appears to trigger a crash on Windows 8.1 PCs that runs a disk encryption driver, according to user complaints about the problem in a thread on a Symantec support forum.

Many of those affected are running TrueCrypt but the issue is by no means limited to that utility, affecting other full-disk and file encryption utilities as well.

Users began complaining about the issue in mid-December and it is still not fixed. Downgrading to Norton 2014 has been suggested as a temporary stopgap ahead of a more comprehensive fix. The four page thread features scores of users complaining about problems.

In response to queries from El Reg, Symantec - the developers of Norton anti-virus - said it was working on a fix.

TrueCrypt and its derivatives are non-conforming to WMI PNP requests as described by Windows documentation.

Norton is aware of this issue and is working to provide a fix as quickly as possible to its customers. In the interim, we are working with our customers on mitigation options. Our top priority is ensuring that our customers are protected and we will continue to share information as it becomes available.

We learned of the problem from Reg reader Sam who hit problems when he attempted to use Norton anti-virus in conjunction with the SafeHouse, another disk encryption utility.

“The BSOD is for the disk driver for the encrypted disc as soon as it tries to access it,” Sam explained. “It’s not just TrueCrypt, several disk encryption programs have the same issue.” ®

TrueCrypt remains in a state of limbo it entered when it developers claimed it contained unspecified vulnerabilities and recommend users adopt alternatives like Microsoft's BitLocker last year: but the technology is still widely used.