Tommy Flowers and his valves: their part in Hitler's downfall 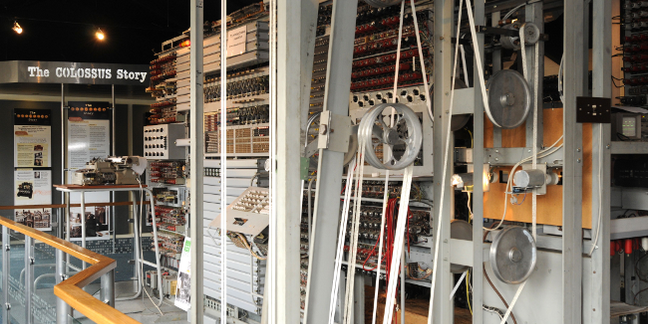 Once muzzled by officialdom, former operators of Colossus have reacted well to a Royal Mail stamp marking the achievements of the computing beast and its designer, Tommy Flowers.

The Colossus stamp is part of eight in the Royal Mail’s series, called Inventive Britain.

Up to 10 functioning Colossi ran around the clock at Britain’s war-time intelligence centre, Bletchley Park, cracking the cryptographic codes used to scramble the German high-command’s messages during WWII.

The machines are credited with speeding up the time it took to break German codes, thereby helping produce Allied victories and shortening the war.

They were run by up to 550 staff, many women – WRENs (Women's Royal Naval Service) working in hot and sometimes dangerous conditions programming the machines.

At the National Museum of Computing (TNMOC), home of today’s Colossus rebuild, those women are now thrilled. At the time, Bletchley was smothered by the Official Secrets Act, and people weren’t allowed to tell each other about their work, let alone the outside world.

Former WREN Irene Dixon was 19 when she arrived at Bletchley and spent 18 months as a Colossus operator. In a statement released by TNMOC she said:

“I dared not speak freely of this until 1995 when I visited Tony Sale and his team to see them rebuilding Colossus [now at TNMOC]. Tommy Flowers’ invention was fantastic and I’m especially proud of him because he was an East Ender, like me!”

Dixon’s former colleague Betty O’Connell added: “I hope that this stamp will promote the whole story of Colossus and the breaking of Lorenz and help give it its rightful place in history as the pinnacle of code-breaking at Bletchley Park.”

The credit for Colossus is given, rightly, to an engineer named Tommy Flowers with the General Post Office (GPO), forerunner to BT.

Colossus was built to break the German’s fiendishly complicated Lorenz machine, successor to the Enigma and capable of encrypting a message 1,600,000,000,000,000 times. Breaking such messages manually could take days.

Flowers architected Colossus working with Alan Turing; his big break came through harnessing Thermionic valves – the forerunner of solid-state components such as transistors and diodes in more modern computers. Valves were beginning to be deployed in telephone exchanges to automatically switch telephone calls.

Management at the time had been sceptical of the valves’ reliability, but they delivered they goods – performing rapid computational analysis of German codes. Colossus could read 5,000 characters a second, drastically reducing the time it took to break messages.

Flowers proposed a system based on the valves in February 1943 and the first Colossus went live in February 1944. Such was the initial success Flowers came under immediate pressure to build more - 12 were wanted by April. The more powerful Colossuss II model was at Bletchley Park and working by the end of May 1944. It is estimated 63 million characters of “high-grade” German communications were decrypted using the systems at Bletchley.

You can read more in our Geek's Guide to Britain on the Colossus here and Bletchley Park here. ®