Hoping for spy reforms? Jeb Bush, dangerously close to being the next US prez, backs the NSA

'I just don't understand the debate' 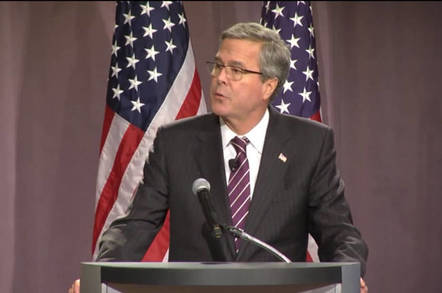 Speaking at the Chicago Council on Global Affairs as part of his run for the White House, Bush made it clear that if he did become president he would retain the programs introduced under his brother's administration.

While covering broad foreign policy topics, Bush appeared to go off script when he said that in order to effectively tackle Islamic terrorism, it was necessary to have "responsible intelligence gathering and analysis - including the NSA metadata program, which contributes to awareness of potential terror cells and interdiction efforts on a global scale."

He continued: "For the life of me, I don't understand.. the debate has gotten off track, where we're not understanding or protecting.. we do protect our civil liberties.. but this is a hugely important program to use these technologies to keep us safe."

Fast forward to the 28-minute mark for the fun to begin in this vid, streamed live on Wednesday, of his talk:

His position stands in contrast to other potential presidential candidates who have been careful not to support a program that has caused widespread public concern since it was first revealed by Edward Snowden in 2013.

Hilary Clinton – who is seen as the frontrunner for the Democratic nomination – said last year with respect to the NSA program: "There is no doubt that we might have gone too far in a number of areas… At some point, I think there needs to be a global pact about surveillance and information and what it's used for."

She went on: "It is an incredibly complex set of issues. How do you maintain privacy - another word for liberty - and also have adequate security?... We need to make it clear to other countries that our tech companies are not part of our government." She has since reiterated the same basic message of a "really difficult balancing act" between privacy and security.

I love America and so did my father and brother

Bush's speech contained no suggestions for reform, spending much of his time taking swipes at the Obama administration, although at one point he appeared to miss the fact that the Snowden revelations had caused enormous damage to diplomatic relations with America's allies, particularly Germany. "Under this administration we are inconsistent and indecisive, we have lost the trust and confidence of our friends," he noted.

The internet got one other mention in the speech.

While highlighting the fact his father and brother were US presidents and stating he was his "own man", Jeb Bush noted: "Every president inherits a changing world - and changing circumstances. In the 1991 Gulf War timeframe, hardly anyone knew that the internet existed or who al-Qaeda was. In 2003, at the beginning of the liberation of Iraq, neither Twitter nor ISIS existed. New circumstances require new approaches."