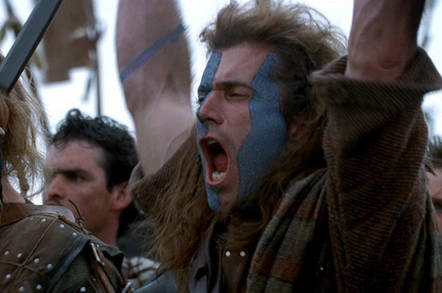 Despite the outcome of last year's referendum on Scottish independence – namely, keeping the union together – Scotland's politicians have declared independence from the UK ... online.

On Tuesday, the Scottish Government shifted its internet presence from 'scotland.gov.uk' to 'gov.scot', redirecting the old domain to its new home.

The move has been heralded for years by the Scottish National Party (SNP). Then First Minister Alex Salmond declared back in March 2012: "Scotland is well on the road to independence, and it looks like we will soon be independent in cyberspace too - the dotScot domain name will be a great boost in promoting Scotland around the globe."

As recently as July last year, and just months before the vote on independence from the UK, deputy first minister Nicola Sturgeon said: “It is entirely right that Scotland should have its own distinctive and recognisable Internet domain, in particular one that will resonate internationally, helping to promote Scottish business and culture throughout the world."

Sturgeon is now First Minister, of course, after Salmond resigned following the 55-45 vote against independence back in November, leaving it to her deputy John Swinney to wave the flag for digital independence.

"Using the dot-scot domain as our primary web address will be a visible symbol of the Scottish Government’s online presence and our involvement with the worldwide family of Scots who choose to express their identity or affinity online," he said in an official release. (JohnSwinney.scot is registered but doesn't resolve.)

Reflecting the Scottish government's legendary efficiency, it has taken just six months to move the website - two months longer than even their longest estimates and one month after what looks set to remain the most importance Scottish holiday for some time - Burns night - given the country's third failed attempt at independence.

Email, however, is going to take a little longer. "Users will see the new web address on our site straight away," said Swinney, "but other changes to the infrastructure, including new email addresses for Scottish Government staff, will be introduced in a phased and structured way to ensure no one is inconvenienced."

It remains a mystery why Scottish voters didn't put their homegrown politicians in charge of the entire country and economy.

As of today, there are just over 8,500 dot-scot domains, putting it above many of the new internet extensions but a very, very long way from established domains like dot-uk which has over 10 million domains. ®