But TSMC still snapping at its heels 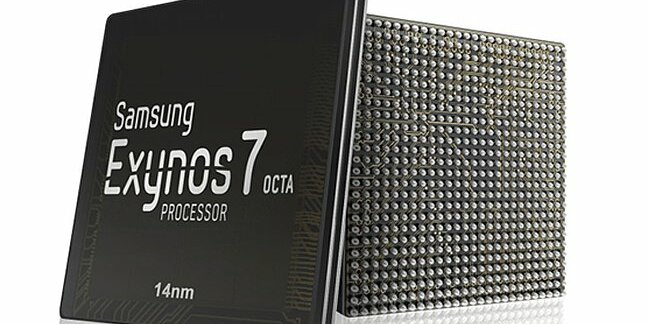 Samsung says it has begun mass production of silicon based on its new 14-nanometer FinFET process, pulling ahead of its competitors in the race to reduce the transistor size of mobile computing chips.

The first product to make use of the tech will be a new version of Samsung's own Exynos 7 Octa, with adoption to expand to other products "throughout the year."

"We expect the production of our 14nm mobile application processor to positively impact the growth of the mobile industry by enabling further performance improvements for cutting-edge smartphones," Samsung marketeer Gabsoo Han said in a canned statement.

He added that Sammy's new wafers represent "undoubtedly the most advanced logic process technology in the industry."

The new process is Samsung's first stab at fabbing processors based on FinFET, a technology that increases silicon die density through the use of three-dimensional transistors that rise above the planar substrate. AMD, IBM, Intel, and others are already using FinFET in their own chips.

Getting there hasn't been easy. The Korean firm has reportedly struggled to get its 14nm yields up to mass-production levels, even going as far as to enlist the help of rival GlobalFoundries in an unusual joint effort.

Intel, meanwhile, has been shipping chips based on its own 14nm process since the launch of the Broadwell-based Core M in September 2014. And contract chipmaking giant Taiwan Semiconductor Manufacturing Company (TSMC), although late to the party, has vowed to leapfrog the others and go from 16nm straight to 10nm by the end of 2016.

Still, bringing 14nm to market now is something of a coup for Samsung, which competes mainly in the mobile processor market. Intel has yet to gain a foothold in smartphones, and mobile behemoth Qualcomm doesn't look like it will have its rumored 14nm Snapdragon 820 ready before next year.

Putting the squeeze on Qualcomm

Samsung will first bring its new process to bear on the Exynos 7 Octa 7420, an updated version of the eight-core system-on-chip (SoC) the chaebol has been shipping in its Galaxy Note 4 and Galaxy Note Edge phonedleslabs.

Details of the new design haven't been released, but if the rumors are true it will differ little from the earlier Exynos 7 Octa models other than being fabbed at 14nm rather than 20nm – resulting, we assume, in a chip that sips less power than the previous versions.

The current Exynos 7 Octa 7410 part comprises four ARM Cortex-A57+ cores and four Cortex-A53 cores using ARM's big.LITTLE design scheme, which marries low-powered cores with beefier ones to help limit power consumption. Rounding out the package is an ARM Mali-T760 GPU, although Samsung may opt for something in the new Mali-T800 line for its new SoC.

Rumor has it that the first device to get the new Exynos may be the Galaxy S6, Samsung's forthcoming flagship smartphone. The S6 was originally thought to be based on the Qualcomm Snapdragon 810, but murmurs that Samsung was planning to pass on Qualcomm's chip began around the same time that talk popped up about possible overheating issues and poor RAM performance with the Snapdragon.

It may be that Sammy is hoping to use the blip of bad press for Qualcomm to win customers away from the San Diego, California–based firm, which has recently come under the scrutiny of Korean regulators for allegedly abusing its dominant market position there.

Even if the Galaxy S6 isn't a hit, however, Samsung should soon have other uses for its 14nm chippery. Although they're strange bedfellows to be sure, Apple and Samsung have reportedly been working together to fab a new version of Cupertino's A9 processor at 14nm. ®