Fight back against illegal GCHQ spying with PAPERWORK! 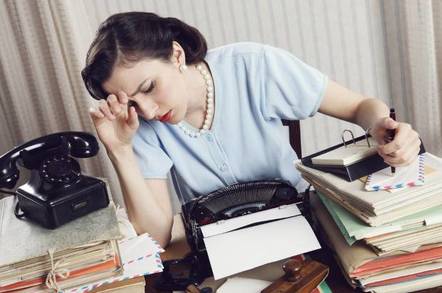 Privacy International (PI) is calling on people to sign up to be part of a mass request for confirmation they have been spied on by Five Eyes spy agencies and to demand the removal of captured information.

Would-be signatories are being asked to submit their name and email address to the organisation, which will then pass them on to Britain's Investigatory Powers Tribunal tasked with determining if the sharing of NSA-intercepted material with the UK's GCHQ spy agency was illegal.

The requests would cover a prodigious amount of data numbering billions of records hoovered up by the NSA and shared with the GCHQ until December last year.

PI will not reveal if agencies other than the NSA collected data, and would cover only that shipped to the GCHQ. This could conceivably include data captured by any Five Eyes agency and shared with the GCHQ via the NSA.

The offer came on the heels of the tribunal's ruling this month in favour of Privacy International that the mass funnelling of intelligence information between Britain and the United States was illegal prior to December.

That decision made on the grounds that rules governing the exchange were secret opened an avenue for users to request the tribunal examine and notify if their data was illegally obtained and, if found in breach, for the information to be destroyed.

The British charity dubbed the ruling a "major victory against the Five Eyes" group of nations which includes Australia, New Zealand and Canada, and said it was possible only due to the flurry of NSA leaks from Edward Snowden.

"Through their secret intelligence sharing relationship with the NSA, GCHQ has had intermittently unrestricted access to PRISM - NSA's means of directly accessing data and content handled by some of the world’s largest Internet companies, including Microsoft, Yahoo, Google, Facebook, PalTalk, AOL, Skype, YouTube and Apple," deputy director Eric King said at the time.

"The extraordinary implications of [the] judgement is that all historical sharing of raw intelligence between NSA and GCHQ took place without an adequate legal framework, and thus was unlawful."

The Tribunal will likely be swamped if the campaign takes off. Probes could trawl records collected from NSA programmes UPSTREAM, CO-TRAVELLER, and DISHFIRE, the former having intercepted some 160 billion records from its top five programmes in one month alone.

Privacy International said requests could take years to be fulfilled.

New requests could be made to discover the data collected by individual agencies to current day if the charity was successful in its appeal with the European Court of Human Rights against the decision that the data shared between the US and UK spy agencies was kosher due to the policies of the arrangement being made public as a result of the legal action. ®