Boffins baffled by the glowing 'plumes' of MARS 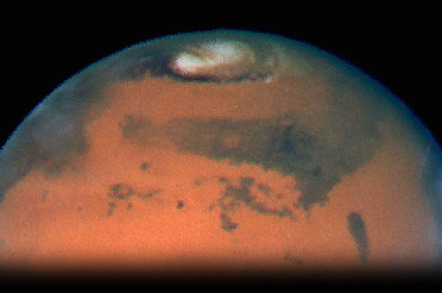 A group of amateur astronomers has discovered a tricky conundrum for the professionals, documenting atmospheric plumes - or something that looks uncannily like them - above Mars... where they should not occur.

The observations, made in March 2012 and written up for Nature here (PDF), found plumes in the Red Planet's atmosphere at between 200 and 250km above the surface.

As lead author of the paper, Professor Agustín Sanchez-Lavega of the University of the Basque Country in Spain, notes the plumes “challenge our current knowledge about the Martian atmosphere”.

It's the altitude of the plumes that's problematic, as the researchers note. Ice crystals can form atmospheric plumes, but the paper notes that these occur below 100km altitude; dust storms max out at 37km.

If the plumes' origin can't be determined, the University's release says, they could pose a hazard to low-orbit Mars missions.

It's feasible that the plumes could be some kind of aurora, but the paper states that if it is, it's 1,000 times brighter than aurorae seen in Earth's atmosphere. 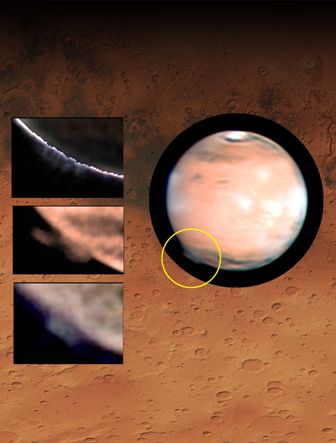 The mysterious plumes. Source: University of the Basque Country

The plumes were spotted at the day-night boundary (the terminator), extending between 500 and 1,000 km in both the north-south and east-west directions, appearing at roughly -45° latitude / 195° west longitude.

According to Discovery, the aurora theory is regarded as unlikely, professor Sanchez-Lavega (lead author of the paper) describes the “immense energetic flux” required for an aurora as “unrealistic”.

Sanchez-Lavega's preferred explanation is that the plumes reveal something new about Mars' meteorology: for water or carbon dioxide to condense like this at 200km would require a large temperature drop, “something not foreseen by any atmospheric model”. ®