ATTENTION SETI scientists! It's TOO LATE: ALIENS will ATTACK in 2049

SETI boffins have forgotten the Bebo Incident of 2008 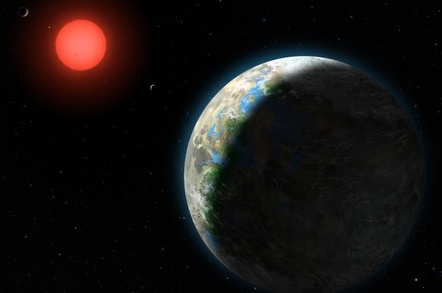 Today, top experts on aliens will debate one of the most pressing issues of modern times: to wit, should the human race send out signals with the aim of letting any possible extraterrestrial beings know we are here?

But the brainboxes assembled in San Jose for the annual shindig of the American Association for the Advancement of Science (AAAS) have apparently forgotten that this decision was taken out of their hands seven years ago.

As regular Register readers will no doubt recall, back in 2008 the management of the doomed teenybopper blabber portal Bebo, in a desperate attempt to drum up some buzz around their monumental collection of slack-jawed internet mumblings, decided to beam a selection of their content at the Gliese 581 star system.

Having trawled up a grim selection of semiliterate web-2.0 crowdwisdom from their site's devotees, they hired the controversial Russian astronomer Alexander Zaitsev to fire their awful guff-blast at Gliese 581 from a powerful Ukrainian radar telescope rented for the purpose.

Gliese 581, a dim red star lying just 20 light-years away in the constellation Libra, is known to posess several planets. Gliese 581c in particular is thought by many scientists to lie at such a distance from its parent star as to allow liquid water to exist on its surface, and thus for the possible appearance of life along somewhat terrestrial lines.

Unfortunately for humanity, any intelligent life resident on Gliese 581c is liable to have superhuman strength as the planet's surface gravity seems likely to be several times as strong as that of Earth. Alternatively the aliens might be some kind of underwater kraken-men making use of buoyancy to resist their homeworld's fierce gravitation, or perhaps a race of gelatinous slime-oid blobominations.

No matter which, it's plain that the aliens will be very angry indeed when the Bebo guffblurt blasts into their solar system in the year 2029, drowning out their own media and communications with a horrifying compilation of drool-chinned web2.0 bilge including pictures of cats, boy crooners, Hannah Montana and such messages as:

Our bodies are made of bones ... We have senses. Smell, Taste, Sight and Touch. Without any of these things, we wouldn't live.

I love Television. We watch animated cartoons and real-life drama on it. I could sit and watch Television all day.

Even if the aliens haven't yet developed planet-smashing weapon systems or huge, horribly beweaponed interstellar invasion fleets on their own account, they will surely do so at once under such a stimulus: in order to revenge themselves upon a civilisation which - unprovoked - would commit such a solecism.

Assuming that the aliens haven't mastered faster-than-light technologies, we can expect a devastating counterstrike of some kind from the year 2049 onward. If they have hyperdrive, world-volatilising strategic tachyon accelerators or such like, we might cop it as soon as 2030.

We'll just have to hope that in fact life has not appeared in the Gliese 581 system (or any other within the emission cone of the Bebo guffpulse) - or that, if it has, it has not evolved beyond the level of unintelligent pond scum or similar and thus will not be offended by the transmission.

But if we're unlucky, we'll have only the concepts of social networking and web2.0 to blame for the imminent extinction or enslavement of humanity.

Are you listening, Silicon Valley?