All that is storage does not beget gold

Opinion NetApp's third quarter results were poor but NetApp revenues have been flat or falling for a couple of years now. Management doesn't seem to view this as a deep-set problem requiring deep-set answers.

In the earnings webcast, NetApp's management said the Q3 revenue fall was due to foreign exchange (FX) and sales execution issues. Sales revenue forecasts coming out of Q2 were good in November and stayed good in December.

The wheels came off in January when 40 or more large deals didn't come in. CEO and chairman Tom Georgens seemed very angry about this on the call. He said the deals were closable, and sat down with the sales heads at the quarter's end to understand what happened with 40 or so big deals that didn't come in.

It wasn't, he said, due to product or secular (long-term) issues. NetApp remains convinced of the fundamentals and its strategy of using an ONTAP data fabric to provide end-to-end storage facilities across private and public clouds.

Nor was the upset due to sales leadership changes, there being new heads in the quarter for global sales and Americas sales.

There was a record number of million dollar-plus deals in the quarter. The problem which led to those 40 or so very big deals not coming in, Georgens said, was down to sales execution issues.

Georgens said NetApp believes it was partly a “feet on the street” matter and aims to recruit more sales heads. It will take time for that to happen and for them to become productive. The FX issues are still with us so the next quarter looks flat.

The NetApp CEO thinks his competitors, EMC and so on, are not seeing what NetApp has seen because their quarters ended in December. It was a January issue and NetApp saw large accounts elongating sales cycles, not agreeing budgets for large storage refresh deals and staying with what they had.

That's the view from the ONTAP mothership bridge, anyway.

A countervailing view is that the ONTAP bridge windows are fitted with distorting glass and NetApp's sight is restricted. Look at a chart of its recent annual results: 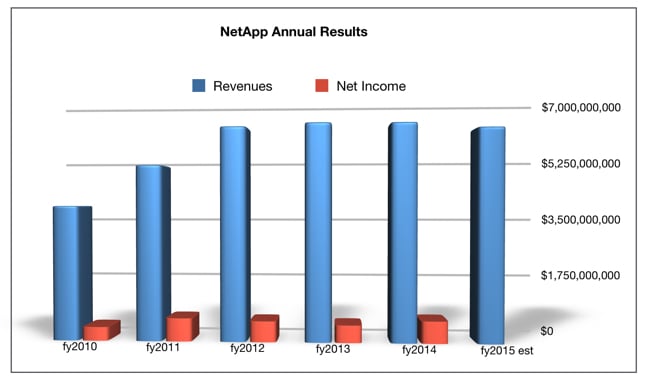 Revenues and net income to FY2014 with FY2015 estimate added.

If we grant Georgens that there were temporary and exceptional issues this quarter, we can still ask why there has been low or no growth for two years. And why, in the coming full fiscal 2015 results, is the company likely to show a decline in line with this?

William Blair analyst Jason Ader writes: "This is the fifth consecutive year-over-year decline in the top line, a worrying trend for the company."

Is NetApp so besotted with ONTAP – and it is a great product set – that it cannot see beyond it? Like parents with a beloved but wayward child, are they too forgiving and incapable of dishing out the tough love it needs?

We think that NetApp is too focused on large – ONTAP – deals with existing customers. It is simply not seeing the myriad smaller deals lost to competitors with better all-flash arrays, hybrid arrays, cloud storage gateways and hyperconverged/virtual SAN products.

It is also not really competing in the Big Data storage and analytics space.

FlashRay is a single controller product in limited availability, with little or no ONTAP integration and few data services. The sense of excitement around it is palpably absent.

Indeed, in the earnings call Georgens said that all-flash FAS was doing well and is a compelling value proposition. It also uses some FlashRay Technology as does the EF all-flash SANtricity arrays – as if to say that FlashRay has not been a wasted development.

The EF6560 has had a good SPC-1 benchmark recorded and Georgens said another compelling benchmark was coming. We think that this is an all-flash FAS benchmark and not a FlashRay one.

FlashRay, he said, will be evolved and developed to suit the market segments it is targeting. In our view FlashRay has been downgraded and is no longer a hot product that could drive growth.

There is no FlashRay revenue rescue party in sight. NetApp has its hopes pinned on the ONTAP data fabric idea with recent acquisitions like SteelStore helping that by backing up data to the cloud.

It also has its StorageGRID object storage play. Yet this is small fry, somehow playing into the data fabric concept, and has no real excitement about it.

Where, for example, is anything similar to the HDS Pentaho acquisition?

Georgens sees NetApp only making tuck-in acquisitions in the future. Of course, if the right major opportunity came along at the right price ... but you can't predict those.

He sees no need for any changes to NetApp's fundamental product strategy. Others differ.

We have contended that NetApp faces structural challenges, driven by intensifying competition in the storage market and emerging trends, such as cloud, flash, hyperconverged systems, software-defined storage, and white box solutions, which, taken together, are disrupting demand for traditional SAN/NAS disk-based systems (NetApp's stronghold).

From a competitive standpoint he continues to hear that "emerging players, such as Nimble, Nutanix, Tintri and Pure, with more modern, flash-optimised architectures, are targeting NetApp deployments for displacement and seeing a good degree of success, thanks to cost and performance advantages. These flash upstarts are also hiring a substantial number of NetApp sales reps, which allow them to target existing NetApp deployments more effectively".

El Reg would sum up NetApp by saying it is focusing too much on its installed base and, secondly, is far too ONTAP-centric. Every strategic initiative has to support ONTAP in some way. Look at what happened to FlashRay. The product, intended to be revolutionary at its inception, is arguably being stifled now by the concentration on all-flash FAS for data services and EF560 for speed. ®